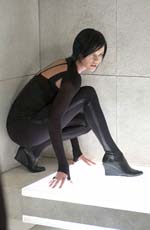 Aeon Flux may be a mess, but it’s a beautiful mess, full of the sort of far-futurist thinking that might be mistaken for the extreme edge of Bruce Sterling and William Gibson’s cyberpunk. Like the work of those authors, it doesn’t lack for nifty (and often depressing) ideas of where mankind is currently heading. Based on Peter Chung’s mid-Nineties animated MTV series, the film is set 400 years in the future, after a killer virus has wiped out 99.9% of the world’s population, leaving the remaining five million ensconced in what appears to be a better-irrigated version of Logan’s Run’s backlot. A utopian society headed by Csokas’ Trevor Goodchild and his duplicitous brother Oren (Miller, looking and acting like the evil twin of his now oh-so-quaint Hackers character) has grown up in the shadow of the apocalypse. As in all utopian societies, there’s trouble afoot and rebels on the hoof, the former consisting of suddenly missing citizenry and the latter arriving in the form of Theron’s title character, an ultra-chic assassin possessed of an Anna Sui-meets-Richard Kern fashion sense and legs that appear lengthy enough to constitute an entire Rockettes chorus line by themselves. And then it’s kick, one, two, kick into Aeon’s adventures through the proverbial looking glass, as her non-rebel sister is snuffed out in her place and Aeon goes on a revenge bender (guided, it must be said, by McDormand’s Handler, who shows up in her noggin every time Aeon ingests a little white capsule and looks altogether too much like the Red Queen on a very bad hair day), seeking to save what little remains of life as we know it. The story, with its obvious references to the current state of our own none-too-utopian affairs, i.e., rampant surveillance, nontransparent officialdom, and the sudden re-emergence of Lycra in places not specifically reserved for personal displays of athleticism, speaks to the current zeitgeist of paranoia and distrust while attempting to be a sort of feminist counterweight to mainstream Hollywood kickassery. Theron, for her part, looks like she’s having a ball, and her slinky, huggy, neo-B&D costumes – occasionally adrift amidst all the Bauhaus-on-acid production design – are the ne plus ultra of high fashion appropriated for low culture: She’s the anti-Tank Girl and then some. The film falters, however, when it comes to the script (by Phil Hay and Matt Manfredi), which forces its Oscar-winning actors to gnaw over pronouncements of such mock gravitas that at moments it’s all you can do not to giggle. What worked on Liquid Television doesn’t translate as well to the world of flesh and blood. While its heart is in the right place, Aeon Flux’s head is just a little too high to make much sense. 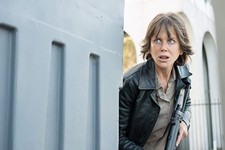 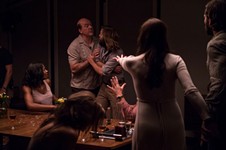