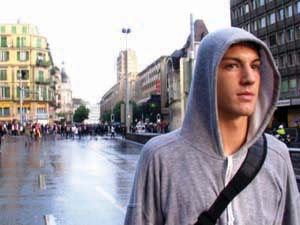 It’s not exactly that Loïc (Chatagny) is stupid, though his brainy best friend Marie (Koutchoumov) clearly outpaces him. And he does have to look "Hitler" up in the dictionary. But, really, he’s amoral, and that’s his failing. He’s capable of learning but not terribly interested in it: He likes picking up guys through Internet personals, then picking their pockets while they’re showering. Things change when he meets Lionel (director Baier, who is mostly unseen but still present onscreen through his character's voice and point-of-view shots), who asks him real questions about who he really is and what he wants out of life. Greatly to his credit, Baier avoids the pitfalls of gay-identity moviemaking; specifically, the film doesn’t over-rely on its dialogue, and its storytelling is elliptical and episodic rather than classically narrative. It feels gimmicky at times – the use of split-screen wears thin – but it also feels fresh and different overall. Loïc’s character is fully realized through his exploits and given dimension by his relationship with Marie, which is the real centerpiece of the story. They differ not just by gender and orientation but by something even more fundamental: their philosophy of human-object relations. Loïc doesn’t associate sex with love, or even with "feelings" – it feels better but is otherwise similar to his work inspecting chocolate bars in a candy factory – and Marie simply doesn’t understand. Chatagny is a novice actor with more energy than technique, but Koutchoumov balances him with a quiet gravity, and together they carry the film, even when Baier gets busy juxtaposing explicit group sex with images of factory equipment and objects from a museum of animal oddities (example: a six-legged sheep). The performances add a necessary element of human accessibility. Without them, the movie would be conceptual and cold. As it is, it loses momentum with a third-act subplot about a local soccer star (Alves) with whom Loïc becomes obsessed; though it provides more philosophical grist for Baier’s mill, it disrupts the rhythm – purposefully, I’m sure, to make the point of his potential transformation – and Loïc’s tale sputters to its conclusion. Garçon Stupide is interesting enough to merit an audience broader than its intended niche, though it isn’t perfect. Moreover, its outlook on human sexuality is pretty grim, so don’t bother bringing a date – unless you want to pick his pockets and pilfer from his medicine cabinet.