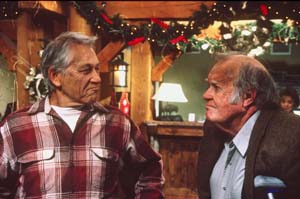 Christmas in the Clouds

This Native American romantic comedy, which won the Audience Award at the 2001 Austin Film Festival, arrives in theatres four years late but seasonally right on time. It owes a small debt to White Christmas, sharing with that Bing Crosby crooner a hotel-resort setting and a threat to the resort’s livelihood by way of snow that refuses to fall. But Christmas in the Clouds plays the holiday card smartly, using it for window-dressing and not much else. And what window-dressing – when Mother Nature finally cooperates with a blanket of white over mountain vistas in Utah, the effect, lensed by Steven Bernstein, is breathtaking. The resort, too, is something to behold: The film was shot on location at the Sundance Resort, here called the Sky Mountain Resort. Sky Mountain’s GM, divorcé Ray Clouds on Fire (Vahle), and his staff are all up in a tizzy over the impending arrival of an anonymous travel writer, whose rating could make or break the struggling resort. The travel writer, an alcoholic curmudgeon named Stu O’Malley (Walsh), checks in right around the same time as a leggy widow from New York named Tina (Tosca). Tina’s using an alias, too – the better to scope out her previously unmet pen pal, Ray’s father, Joe Clouds on Fire (a wonderfully cheeky Vlahos). Mistaken identity ensues, with Ray confusing Tina for the travel writer, Tina confusing Ray with her adored pen pal, and Stu confusing a pet mouse done up in war paint with signs that his lush life has finally degenerated into all-out hallucination. Also in the mix are Native American icons Graham Greene (as a vegetarian chef on a mission to convert carnivores) and Wes Studi, with a Borscht Belt cameo as himself, overlording a bingo game. At its best, Christmas in the Clouds is sweetly daffy; Montgomery, a first-time writer/director, doesn’t have the control yet to steer entirely clear of the cornball. There are several ill-advised fantasy sequences (revolving around the front desk clerk’s romance-novel fetish), and a few of the players appear plucked from the aw-shucks-and-yuks school of TV acting (Walsh, a seasoned screen pro, is the worst of the lot, and looks about one rib eye and whiskey sour shy of a massive coronary). But there’s an abounding sweetness to it all that only a real grump could deny. This is a Hallmark movie with high production values – and so what? It’s gently funny and genuinely good-hearted, family-friendly stuff. Fair warning, lest I get any angry letters: There is a long liplock that tastefully cuts to two consenting adults in bathrobes the morning after; I’ll leave it to Mom and Dad to explain what happened to those 12 hours and combined six layers of clothes. I imagine kids will be too distracted by that marvel of a mouse anyway, and wondering how war paint would look on Fido back home.