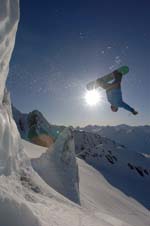 Do you remember the Snurfer? It was a mid-Sixties precursor to today’s snowboards that was developed by a retired chemical engineer from Michigan with the unlikely name of Sherman Popper. His grand idea – essentially a surfboard for the ski slopes, with a steering rope mounted to the front – ended up under scads of Christmas trees starting in 1965. (I barely recall a much smaller version of myself being trounced by a Snurfing big kid on some snowbound, upstate New York hillock ages ago. The image must have stuck, though, since I ended up glued to a skateboard from for a solid decade beginning in 1984.) This vertiginous documentary (which really ought to be playing on IMAX screens) echoes skateboarding’s parallel history and Stacy Peralta’s brilliant doc Dogtown and Z-Boys, as well as that director’s more recent Riding Giants, in which pro surfers are towed out to sea to tackle the biggest waves in the world. The five subjects of First Descent – 40-year-old snowboarding legend Shawn Farmer, 39-year-old Nick Peralta, plaid-clad Vermont teen Hannah Teter, Norwegian superstar Terje Haakonsen, and red-haired, teen slope rat Shaun White – are shuttled out to the far back country of Alaska’s tallest and most inaccessible peaks via helicopter and then, one by one, rocket down the crag-encrusted, gorge chutes like buckshot fired from God’s own 20-gauge. In a word, it’s gnarly. In between these "first descents," the filmmakers unravel the brief history of snowboarding, including the surreally appropriate incident at the 1998 Winter Olympics in Nagano, Japan, wherein Canadian Ross Rebagliati very nearly lost the sport’s very first Olympic gold meda after testing positive for marijuana use. ("He should have been given a second medal for being able to ride stoned," confides one powder-happy wag.) Along with narration from Henry Rollins and music from the likes of Black Flag, Minor Threat, and Face to Face, there’s much made about how snowboarding is a sport in its infancy. That’s true. Unlike skateboarding, which came up in a relatively slow progression from street to pool to ramp to corporate sponsorship and the XGames over nearly three decades, snowboarding moved from a Banned Everywhere status to the Olympics in less than half that time, which doesn’t make it any less of a sport, per se, but clearly drew the corporations and big-money outfits much faster. In many ways, it’s skating on frozen adrenaline outbursts: The jumps are far higher, the risks far more dangerous (at one point the filmmakers, seasoned snowboarding pros themselves, catch Haakonsen’s wild, near vertical riding as it initiates a mammoth avalanche), and the rewards not just financial but mental, physical, and spiritual as well. Final Descent’s ace in the hole, though, is in its cross-generational quintet, which allows for a cutaway cross-section of the sport's best and brightest to be observed as they do what they do best. The garrulous, bearded Farmer, in particular, comes to be something of a big brother figure to Teter’s blonde, blue-eyed teen superboarder. It’s a gas to see the age difference melt away atop a wind-whipped, 7601-foot-high mountain peak as the chopper lifts off, leaving both filmmakers and subjects with only one way down from what appears to be the roof of the world. Awesome.