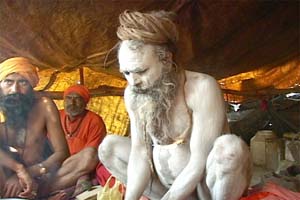 "The world wouldn’t run without saints and yogis," declares Shiv Raj Giri, one of the handful of subjects in this documentary about Hindu mysticism. Director Fouce, in her debut, follows a loosely organized group of such spiritual voyagers through a series of holy festivals and pilgrimages and trips to Indian ashrams; the result is a largely factual portrait of the yogi life, sufficiently detailed to attract a general audience but not as inquisitive and lyrical an approach as the subject matter probably deserves. Westerners who are already curious about spiritual renunciation and the performance of austerities – more on those in a minute – should probably check the film out, and it’s a slam dunk for the classroom setting, but Fouce doesn’t delve deeply enough into the heavyweight matters to make the film a true documentary, nor is there enough of a narrative in her nonfiction to suggest a strong creative presence behind the camera. Fouce lets the yogis speak for themselves about why, for example, a devotee would stand upright for 12 years in an attempt to bring about a divine vision, and that’s fine. But the yogis are pretty laconic, after all, and without a stronger focus, the movie seems mondo at times, with the longest scenes devoted to self-mortification. (Please do not ask me to describe the "penis-control exercise" undertaken by Shiv Raj Giri as a form of protest against Parliament after the government decreed the demolition of sacred sites so modern buildings could be constructed.) Fouce is obviously committed to her subject matter, so it’s ironic that her film seems less than solemn. Elsewhere she follows the initiation of Santosh Giri, a 14-year-old initiate whose remarks, too-cheerfully dubbed into English, comprise voiceover for the movie. After he found Santosh wandering the streets of Calcutta as an orphan, Shiv Raj Giri became his guru; it is difficult to imagine a North American teenager so pumped up about constant prayer, material renunciation, pilgrimages barefoot through the Himalayan snow, and adornment with holy ash. Herein lies the film’s strength: It clearly conveys the importance of spirituality within Indian culture, even as the landscape becomes increasingly modern and urban. The yogis heal the sick, perform acts of charity, and advocate for the environment. They are indeed a fascinating subculture, strenuously committed to their faith and to the denial of their own self-interest (a self-interest that Western culture vigorously defends). Naked in Ashes is plenty thought-provoking, but it’s not much of a movie and ultimately inspires curiosity rather than passion.