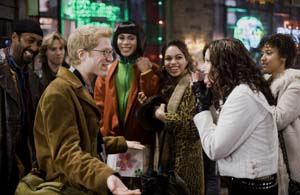 Playwright Jonathan Larson’s Rent opened on Broadway just shy of 10 years ago and was an instantaneous success, evincing the sort of critical kudos and popular response no scribe in his right mind would tempt the fates to consider in advance. Larson never got the chance – an aortic aneurysm felled the 35-year-old writer a brief three months before the play moved to Broadway – but his ecstatic and life-affirming update of Puccini’s La Bohème is no less relevant today than it was before it garnered a Pulitzer Prize, four Tony Awards, three OBIEs, and enough gilded statuary to buckle even Charles Foster Kane’s mammoth mantelpiece. New York City of 2005 is a far distant land from the East Village of 1996 (both play and film are set in 1989), and Rent, for all its feel-good desperation and plague-battered bonhomie, arrives in theatres with the curious but unmistakable air of an artifact from another time, even another world. The characters, a band of starving artists cast in the finest Bohemian tradition, are young enough (and perhaps wise enough) to make merry in their sprawling, unheated lofts, and to manhandle life by the jugular scruff and bathe their restless souls in a heady, revivifying shower of art and intellect, sex and drugs and rock & roll, even as their generational T-cell count plummets faster than the mercury on the Battery come November. Young people everywhere – and those older members of this troubled and troubling new America who can still recognize the virtue inherent in optimistically blowing a Bronx cheer toward death’s ivory grin – will revel in the film’s contagious passions. And why not? What artistically inclined kid hasn’t, at some point, ached to have been a part of Warhol/Haring/Basquiat-era New York, or, preceding that, the countercultural howl of the late Sixties, or, better still, the Beats’ sprawling Kerouac-ian road trip to nowhere? None worth his or her weight in dreams, I’d wager. So Rent, the movie, arrives as a loud, guitar-driven musical with only one solidly memorable showstopper that I can discern (the hormonally and hopefully turbocharged "La Vie Bohème," fittingly enough), but also with a culturally and sexually diverse set of characters who, in their steadfast love of both life and one another, put the lie to certain current quarters’ infatuation with "family values." This brood – melacholy musician Roger (Pascal), who falls for junkie doll Mimi (Dawson), who are filmed (charmingly, via an ancient, hand-cranked Bolex) by Mark (Rapp), much to the amusement of garrulous gay friend Tom (Martin) and his transvestite lover Angel (Heredia), as Mark’s newly minted lesbian ex-girlfriend Maureen (Menzel) performs a horrific, 1980s performance art-astrophe to woo new gal pal Joanne (Thoms) – is nothing less than a dramatic exemplar of the great American immigrant experience, albeit with gender- and race-bending pansexuality replacing Ellis Island’s influx of Eastern European Jewry and Irish, Italian, and Asian newcomers. Such are the seeds of American diversity, the very bedrock of not only the East Village (now hellishly gentrified out of reach for all but the most affluent artists) but of the now-mythic American Dream itself. Rent’s all-singing, all-dancing, sweetly ragtag and occasionally doomed bunch displays more core family values than any 20 red-state yapdogs you might care to mention. And despite the grating, workmanlike direction of Chris Columbus (he’s no Robert Wise, and Rent is nobody’s idea of West Side Story), this boisterous adaptation is both a vivacious, wiseacre musical and an inarguable morality lesson: Love is all you need. Oh, and rent, of course.