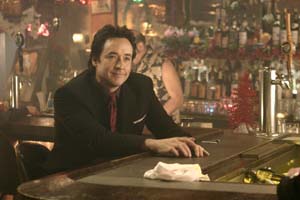 It’s Christmas Eve in Wichita, Kan., and the stage is set for dastardly yet comic film noir doings in The Ice Harvest, but the film’s difficult genre straddling never quite congeals. Instead of an action comedy that’s as slick as ice, Harold Ramis’ new film is more like a river of slush, neither here nor there. The professionalism of all involved – from comedy veteran Harold Ramis (Analyze This, Ghostbusters) and sardonic leads Cusack and Thornton to the script by Richard Russo and Robert Benton (Nobody’s Fool) and the delightful secondary performances by Quaid and Platt – ensures that The Ice Harvest is always dependable. Yet this level of obvious quality is also what dooms the movie: It never quite lives up to its potential. The plot opens as sleazeballs Charlie (Cusack) and Vic (Thornton) steal a couple million dollars from their boss Bill Guerrard (Quaid, who regrettably doesn’t show up until the film’s last act) while using the cover of Christmas to make their getaway. However, an ice storm in Wichita has turned the roads into a giant roller rink, and the two have decided to put off their escape until the next day. Thus begins their slippery descent into a long night of intrigue. Guerrard is the kingpin of the area’s strip clubs, for whom Vic serves as a manager and Charlie, an attorney, is on retainer. Their occupations provide the backdrop for much of the film’s sleazy sensibility, as Charlie spends the night traipsing to and fro among the city’s grottier establishments, having become dimly aware that he might be not be getting a fair shake from his partner in crime, who is holding all the loot. The film’s sarcastic and mean-spirited dialogue is the type of material that seems tailor-made for actors like Cusack and Thornton, yet there’s often the feeling that they’re coasting on autopilot, retreading the familiar instead of finding something new. Platt provides most of the film’s comic relief as Charlie’s thoroughly inebriated legal colleague and second husband of his ex-wife. He’s so enjoyable in his slurry, blurry excess that it’s almost possible to imagine his routine as an enjoyable stand-alone act. As the femme fatale, Nielsen is never believable, as if the character were built on nothing but film noir shadows and stylized costumes. And that’s really the basic problem with the movie: It never becomes believable. The characters never ignite and seem more like actors who hit their marks but little more, the ice slick that overtakes Wichita never appears to be quite as calamitous as claimed, and the challenging tonal duality of comedy and suspense fails to gratify either impulse satisfactorily. Indicative of the film’s unwillingness to really plumb the depths of the darkness it has set in motion is its substition of a redemptive ending for the dark finale that concludes Scott Phillips’ original novel. 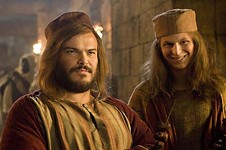 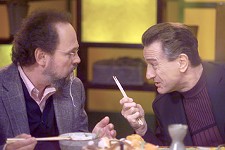 Analyze That
This obviously titled sequel to 1999's mobster-in-therapy comedy may have seemed like a sure thing during the initial round of production meetings but director Ramis ...