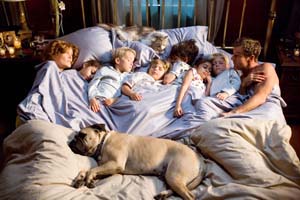 If you can’t wait one more month to see Cheaper by the Dozen 2, you can go to the theatre this week and see this new supersized family comedy, itself a remake of the 1968 Henry Fonda and Lucille Ball comedy. It won’t spoil your appetite or even leave much of an impression, as tame and uninspired as it is. On the other hand, it won’t offend any sensibilities or desecrate the memory of the original – and will definitely make The Brady Bunch look like an example of prudent family planning. Coast Guard admiral and widower Frank Beardsley (Quaid) moves with his eight children to a post in New London, Conn., as the movie begins. Soon he runs into his old high school flame Helen North (Russo), a widow who has 10 children of her own. (In the movie’s gesture toward reproductive responsibility – and perhaps as an explanation of why Rene Russo seems to be in such great shape – it is explained that six of her kids are adopted.) Quicker than you can say "blended family," the two marry and merge households. Predictably, the kids all hate one another, and Frank's and Helen’s disparate attitudes about discipline and organization create their own mayhem. He runs his house like a ship, with duty charts and bathroom schedules; she is a free spirit who believes that the home should be a cosmos for free expression. Why these two fell in love is something of a mystery, but hey, that’s love for you. Quaid endures more than his share of comic falls and scrapes, while the kids all unite in various schemes to break their parents apart. Director Gosnell, who directed Big Momma’s House and both Scooby-Doo movies, regrettably did better work in those films. Too many of the seams show in Yours, Mine & Ours and interrupt any potential flights of comic fancy. Furthermore, Linda Hunt, Rip Torn, and Jerry O’Connell all put in only momentary appearances, which seems like a willful squandering of several good things. Of the 18 child performers, only Katija Pevec and Danielle Panabaker as rival stepsisters show any real gift for acting. Yours, Mine & Ours is the kind of film that will be suitable for all-ages entertainment once the family runs out of conversation after devouring all the turkey, but it’s unlikely to expand its audience beyond these captives.