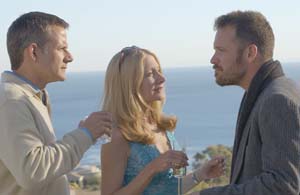 Playwright and screenwriter Craig Lucas (The Secret Lives of Dentists, Reckless, Prelude to a Kiss, and Longtime Companion) debuts as a director of his own material with The Dying Gaul, a nasty little story about interpersonal deceptions and Hollywood ethics. At first glance, it appears to be a telling drama about smart people confined by their circumstances and the various mind games they inflict on themselves and others. By the end of the film, relationships have turned so corrosive that the characters leave an ugly aftertaste in the mind of the viewer. It’s only then that the Herman Melville quote that precedes the film begins to make sense: "Woe to him who sets out to please rather than appall." It suddenly seems clear that Lucas is referencing his own mission here rather than the travails of his characters. If indeed Lucas set out to appall, he has surpassed his wildest hope. Greatly adding to the palatability of The Dying Gaul are the three central performances at the heart of the movie. Sarsgaard, Clarkson, and Scott all deliver some of their finest and most nuanced work in this piece that becomes a delicate dance among the three. Sarsgaard plays a screenwriter named Robert, who is mourning his lover’s death from AIDS. His screenplay, resonantly titled The Dying Gaul, is a hot property that producer Jeffrey (Scott) wants to purchase for $1 million – on the condition that Robert change the characters from two men to a man and a woman. Jeffrey, who is rich, successful, and married to a trophy wife, also wants to have a sexual relationship with Robert. In turn, Jeffrey introduces Robert to his wife, Elaine (Clarkson), a clearly intelligent woman whose life of luxury leaves little time for her other interests. The three interact, while simultaneously withholding information from the others. There’s Jeffrey’s marital infidelity and the cybersex chat room that Elaine uses to really do a number on Robert’s head. (For such intelligent characters, the fact that Robert can’t figure out what’s going on, despite having spoken with Elaine about the chat room in an earlier scene, seems an inescapable narrative flaw.) Even though these characters treat each other with apparent kindness, love, and respect, they’re all engaged in various degrees of manipulation and deceit. The story whips itself along until it reaches such a ferocious conclusion that you may wonder if there was something you missed along the way to explain the intensity of the venom that suddenly gushes forth. The Dying Gaul does not go gentle into that good night.