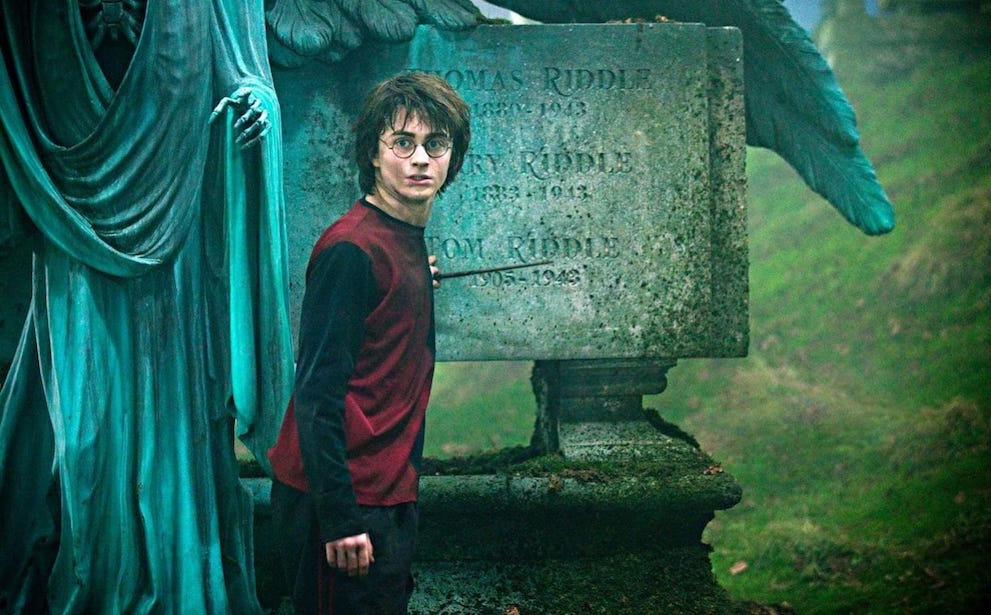 Harry Potter and the Goblet of Fire

Don’t fear the trembling of the skeptics: Newell has not ruined the Harry Potter franchise. This fourth film, following Alfonso Cuarón’s celebrated Prisoner of Azkaban, is qualitatively different from its cinematic forebears: It doesn’t linger on the gothic curlicues of its source material, it moves straightforwardly from place to place, and it emphasizes the emotional development of its characters with dramatic interplay rather than expressionistic, atmospheric gloom. This approach makes sense; there are no Dementors here, and despite the third-act appearance of He Who Will Not Be Named (Fiennes, whose subdued monster make-up makes him appear noseless), the really, really scary part is the school dance.

Newell understands that the real thrust of the source material – at least in this particular book – is its characters’ passage into adolescence, so he keeps a tight rein on author J.K. Rowling’s airy digressions into magical whimsy (the Quidditch World Cup tournament, for example, merits a minimum of screen time compared to its lengthy depiction in the novel) and takes us right into the heart of the beast: teenage hormones, fallings-out with friends, meeting weird kids from other schools, being hated by your schoolmates, fearing your new teacher yet again, and having to slow dance. Not every purist will like Newell’s strategy, but it’s certainly better than the textual slavishness of Chris Columbus’ Potter films.

Here at least we sense the presence of a thinking person behind the controls, and Newell is correct to play to his own directorial strengths, which differ from Cuarón’s. When he does indulge in the fancy stuff – Harry enters the Weasley family’s tiny and spartan-seeming tent at the World Cup campground and discovers inside a sprawling, palatially furnished guest house – he brings it right back to his characters: "I love magic," Harry (Radcliffe, who’s getting wooden as he ages) breathes, taking it all in. Were such attention not paid to onscreen economy, the movie would be a mess, with its sprawling plot and myriad new characters. (As it is, there’s very little exposition, so Muggles will be lost.) Newell is also somehow essentially British: He adores his thespian ensemble, he’s interested in the social realism underpinning the book’s flights of fantasy, and he can’t resist putting Jarvis Cocker in a scene. In other words, the movie is darker than the others not because it’s more otherworldly, but because it’s more real – a seeming irony that actually makes sense.

But is it good?

Sure, it’s good at what it does well. When Harry asks Cho Chang (Katie Leung) to the Yule Ball and she shoots him down because she’s already going with that lunkhead squarejohn Cedric Diggory (Robert Pattinson), it’s as terrifying as Harry’s encounter with mer-people in the Black Lake. Per usual, the supporting characters steal the show, and Newell gives them infinite space. (He probably gives Miranda Richardson, as tabloid diva Rita Skeeter, a little too much room, but the whole movie could be about Shirley Henderson as bathroom apparition Moaning Myrtle, and that would be fine.) Parents should be aware that it’s more explicitly violent – hence the PG-13 rating, a first for the series – but really its execution is more adult in a variety of ways, and correctly so.