In his voiceover narration, closeted gay teen Dorian Lagatos (McMillian) reveals that his therapist tells him that he "overanalyzes" everything. It’s true, and although it’s partly due to his immediate quandary about coming out, it’s also his birthright from his hypercritical and always disapproving dad (Fletcher). (I’d also suggest it’s part of the package that comes with first-time filmmaker Tennyson Bardwell, whose very name, unfairly or not, suggests a predetermined inclination toward overwriting.) Dorian Blues is several cuts above the average coming-out movie, a genre that generally privileges the validation of the gay experience over the art of filmmaking. Dorian Blues has wit, humor, good performances, and clever technique that catapults the film into the front ranks of coming-out movies. As played by McMillian, Dorian is a smart, funny, and stereotypically gay teenager who is struggling with the mechanics of comng out to his unaccepting dad. Dorian also has a perfect jock brother Nicky (Coco), who is everybody’s favorite, something that makes life more difficult for the self-recriminating Dorian. With his therapist’s help, Dorian successfully comes out and moves to New York to attend NYU as a freshman. Here the movie’s third act goes astray as the storyline shifts to Dorian’s dating problems, which seem an overextended tangent to his coming-out story. Still, the film has a lot of playful dialogue and pixelated montages (most entertaining is the "Last Train to Clarksville" sequence that provides the backdrop to Dorian’s first seduction) that keep the film moving forward. Dorian Blues first screened in Austin during last month’s aGLIFF festival. 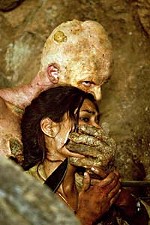 The Hills Have Eyes II
This sequel to last year’s remake is as witless and simpleminded as the irradiated humanoids that serve as the franchise’s bad guys.