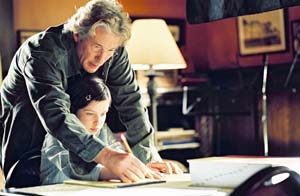 Myla Goldberg’s novel about spelling-bee fever, a family in chaos, and religious/mystic exploration arrives on the screen with all its faults intact, but few of its charms. This is second-rate Hallström, drama plus whimsy that, when rubbed together, creates not friction and fire, but a nubbing-down of both elements. Flora Cross plays Eliza Naumann, an ostensibly unremarkable child who surprises everyone when she displays an uncanny talent for spelling. Her father is Saul (Gere), a Jewish academic who takes Eliza’s new talent and runs with it, neglecting his teenage son, Aaron (Minghella), in the process (apparently, Saul – a born show dad – has only room for one child at a time). Mom Miriam (Binoche) is a cipher: All we know of her is she’s a clean freak and she likes to break into strangers’ houses and steal inconsequential items like an earring or a decorative bowl. It’s fascinating, far-ranging material to work with – the plot threads include Eliza’s preparation for nationals, Saul’s deepening interest in Kabbalism, Aaron’s dalliance with a hot Hare Krishna (Bosworth), and Miriam’s inscrutable obsession – but screenwriter Naomi Foner Gyllenhaal’s attempts to interweave the four threads make for a dramatically inert piece (Goldberg’s novel struggled much the same). As soon as one character, one plot, starts to get interesting, we’re yanked elsewhere; more often than not, it’s the kids who get short shrift. Too bad then, considering they’re the best thing going on here. Cross, with her chin dimple and pretty sulk, is a real find, a quiet emoter (the terminally overeager Gere should take notes), and Minghella (son of director Anthony Minghella) is a sympathetic actor, despite the gutting of his character’s complexity. The adults, both badly miscast, are a real drag: Gere is about as Jewish as my German shepherd, and Binoche’s natural restraint translates into the dull-droms (all the more frustrating when her mostly absent character hijacks the plot’s third act). Co-directors McGehee and Siegel (The Deep End) produce some inventive visuals as they try to dramatize how Eliza "sees" a word in her head (a tactic that works about half the time), and ultimately, this fixation with words – their meaning, their makeup, and their link to spirituality – is Bee Season’s most ambitious undertaking. But a difficult, maybe impossible, task has been set for both writer and directors – that is, how to make cinematic two internalized concepts: spiritual epiphany and the mind’s peculiar process. In their attempt to dramatize these intangibles, Foner Gyllenhaal provides the words, McGehee and Siegel the pictures, but their combined effect, alas, falls far short of transformative. 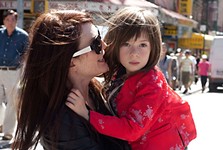 What Maisie Knew
Young Maisie’s divorced parents are negligent, not cruel, in this contemporary take on the novel by Henry James from the co-directors of the Deep End.