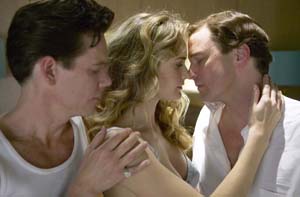 Where the Truth Lies

Master filmmaker Atom Egoyan (The Sweet Hereafter, Exotica) goes for the mainstream with his latest, Where the Truth Lies, and sadly his aim is way off. Whatever instincts guided Egoyan to adapt Rupert ("The Piña Colada Song") Holmes’ show-biz murder mystery for the screen have misled the artist completely. Where the Truth Lies is a sodden, humorless mess full of lifeless performances (except for Lohman, whose work is just bad), purposeless convolutions, and lethargic pacing. With some more oomph, Where the Truth Lies might have risen to the level of fun backstage trash, but it doesn’t even have the mirth to pull that off. The story involves a popular Fifties song-and-comedy team, which is clearly fashioned after Dean Martin and Jerry Lewis, and the body of a nude dead woman that turns up in the bathtub of their hotel suite. Vince Collins (Firth) and Lanny Morris (Bacon) are the country’s top variety performers, and the film opens during one of their Fifties telethons. Lohman plays the celebrity journalist, Karen O’Connor, whose present-day interest in the duo’s long-ago scandal prompts her to instigate a few convolutions of her own. Bacon is the only actor here who brings any verve to his performance; Firth is lackluster and Lohman is inept. The film fails to revel in its retro Fifties allure that might have made it more fun to watch, plus we never see much of Morris and Collins’ stage act, which probably would have been, at least, entertaining, and might have also provided more insight into the story’s big disclosure. Much to-do has been made over the original NC-17 rating given to Where the Truth Lies by the MPAA. Even though the distributors decided to keep the movie intact and release it with no rating at all, it must be said that there’s nothing terribly prurient going on here – at least not much that isn’t already seen in any number of R-rated films. However, the MPAA’s overdue diligence has certainly been used by the distributors to help market the film by upping its sexiness quotient. Don’t be fooled. Someone like Brian de Palma might have found the sexy thriller that resides somewhere within Where the Truth Lies, but as directed by Egoyan Where the Truth Lies is as cold and unseemly as that stiff found in the shower.