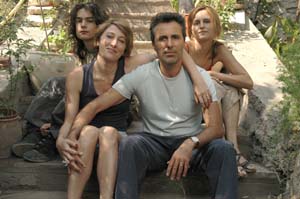 Despite appearances to the contrary currently showing on CNN, the French still like to get their sex on, a fact confirmed again and again in this breezy, featherweight sex farce. That there’s also a horrifically dodgy song-and-dance number performed by two otherwise fine actors may well incite rioting in theatres. All creepy mugging to the camera aside, Côte d’Azur plays like a fluffy wad of chocolate mousse drenched in a sweaty, summery sheen. If you go in for sweaty mousse, and gosh, these days who doesn’t, this will be just your cup of treacle. What there is of a plot concerns husband and wife Marc (Melki) and Béatrix (Bruni-Tedeschi), who head to the Riviera coast for holiday with their teenage kids Charly (Torres) and Laura (Seyvecou). Once there, with passions inflamed by a local shellfish delicacy, the family goes into libidinous overdrive. Erotic hilarity ensues? Not as such. When Charly’s gay friend Martin (Collin) arrives to join in the fun, Béatrix and Marc begin to wonder about their son’s sexuality. As the audience learns early on, he’s not really gay, but the question gives the parents something to talk about and opens up some previously closed sexual doors of their own. The seemingly heterosexual Marc, for his part, begins cruising the beach, while Béatrix, not to be outdone, continues an illicit affair with her balding, middle-aged lover who makes a habit out of hiding in the shrubbery, nude. Daughter Laura takes off with her biker lover, causing Béatrix to exclaim, in what must surely be one of the most memorably awful lines in French sex-farce history, "That guy’s ass! I never noticed he had such a hot ass!" Things go on along these lines for 90 minutes, and while it’s frankly a refreshing change of pace from the real world (French or otherwise), the near-total absence of meaningful storylines makes Côte d’Azur little more than an alluring travelogue with a side order of R-rated humpiness. If nothing else, it made me swear to make it to the South of France before Viagra becomes a necessity, which is likely the filmmakers’ chief intent. I suppose you could take this as a meditation on the current state of familial mores à la française, but with all the sunshine and firm, naked flesh on display, that feels like an awful long stretch, and an effort to boot. The languid, sultry Côte d’Azur requires nothing more from the viewer than eyeballs and the ability to sit through Melki and Bruni-Tedeschi’s whey-faced duet (not as easy as it sounds), and its ultimate message is as French as they come: The family that lays together, stays together. What the hell, it’s more fun than a riot. 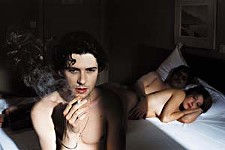 Time to Leave
This oddly dispassionate film about a young man dying of cancer is the French antidote to those Hollywood weepies in which the heroine courageously faces her own mortality with every hair in place. 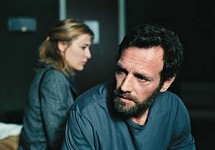 5x2
Ozon's film begins at the end and leads backward over the slow death of a couple's marital bliss, but even while we’re flipping through the snapshots of two people’s disenchantment with each other, it never feels tawdry or excessive or, for that matter, very interesting.