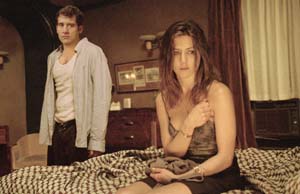 Brit actor Clive Owen, he of the graveside manner and the steely mien, has owned every film lucky enough to feature him since he arrived, on these shores at least, in Mike Hodges’ brilliant, cunning Croupier seven years ago. He stunned then and he continues to do so, quietly, deliberately, and while it’s often difficult to read what’s going on behind those dark eyes and that heavy, somehow painfully noble brow, you can generally be assured that it’s nothing altogether pleasant. Owen is the best thing about Derailed, which is saying quite a bit considering the company he’s keeping. For starters there’s Vincent Cassel, the French actor whose work with wife Monica Bellucci in Gaspar Noé’s unpleasant Irrerversible was one of the recent highlights of relentlessly nightmarish filmmaking. Derailed also comes with Tarantino pal RZA attached, and the ride-pimpin’ Xzibit, but most challenging of all is the appearance of Jennifer Aniston, who proved her Serious Actor mettle ages ago in The Good Girl, but who seems destined to be forever remembered (like fellow cast-mate Lisa Kudrow, who had her own moment of gravitas in Don Roos’ The Opposite of Sex), as the girl from Friends. Derailed, an appropriately grim and stylish bit of latter-day film noir goes a long way toward burying the memory of Rachel Green, but it does nothing to mar memories of Barbara Stanwyck, film noir’s double-indemnifying queen of the duplicitous dark (as if). As ad exec Charles Schine, Owen is saddled with the requisite loving wife, Deanna (George), and enough personal problems to give Job a run for his shekels. His daughter’s juvenile diabetes has just nixed kidney No. 3, and his perceptually perfect suburban life is running perilously close to jumping completely off the tracks. To make matters worse, but infinitely more interesting, he finds himself on the train eyeing a leggy bank exec by the name of Lucinda Harris (Anniston). As it so often happens, one thing (his financial burdens have left him minus train fare) leads to another, and from there leads to a hotel-room quickie, which, naturally, leads to the sudden violent eruption of Cassel’s scheming LaRoche, who bursts in on the coital pair like Pat Robertson busting up a teenage petting party. There is a horrific rape, a pistol-whipping, and then things get really interesting. For a moment, anyway. The battered Charles returns home, tells his wife he was mugged, and that’s it, until LaRoche turns up again, with blackmail in mind and the sort of creepified, home-invading charm Michael Keaton mastered way back in Pacific Heights. Charles, unsure of what to do but more than willing to do it (and yet he’s no Fred MacMurray, either), turns to workplace mail clerk and ex-con Winston (RZA) for aid and advice in counter-plotting, gets it in spades, and then discovers, circuitously, why film noir is so much fun: Everybody gets hurt, but that’s okay because nobody is who they seem. Håfström’s direction (from a script by Stuart Beattie and a novel by James Siegel) is mournfully, soggily, assured, but for some reason Derailed never fully engages our sympathies. I think that’s because it’s difficult to swallow Owen as anything other than eminently resourceful. Still, as a hypothetical warning to potential marital infidels, it’s a doozy.

Escape Plan
Stallone and Schwarzenegger team up for double the fun.