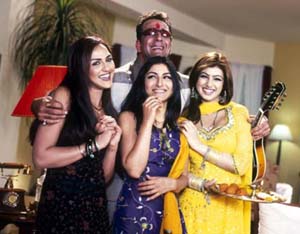 You’ll have to excuse me if I sound a bit discombobulated – I just got back from Planet Whatthefuck, aka Shaadi No. 1, and I’m still reeling from the trip. In a country famous for its exhaustively over-the-top filmmaking, India’s Shaadi No. 1 is an extreme case, a maddeningly manic comedy-romance painted in such vibrant shades of neon pink and Day-Glo violet, and containing such a convoluted, positively insane amount of atrocious punning, godawful muggery, and nonstop musical numbers that the jaw drops, the eyes glaze over, and the mind boggles, battered and adrift in a sea of the silly, the sexy, and the surreal. Like a car bombing staged by the Ringling Bros. Barnum & Bailey Clown Car Cooperative, it’s a blast, huge and overwhelming and altogether too much. Unemployed and unable to convince their more spiritually conservative wives of the necessity of bedroom bliss, friends Raj (Fardeen Khan), Aryan (Joshi), and Veer (Zayed Khan) attempt suicide before meeting up with failed businessman Mr. Kothari (Shah), who first hires them and then hatches an elaborate plan to convince his three single daughters of the importance of arranged marriage by having his new employees first woo, and then dump, the girls. The boys instead fall in love with their libidinous new escorts, who then become fast friends with the wives, predictably resulting in the sort of double- and triple-entendre shenanigans that make you wonder what director Dhawan put in his morning coffee. As befits its Bollywood origins, Shaadi No. 1 is loaded with chaotic musical numbers – most of which feature the three male leads in ever-changing costumes that would put late-era Elvis to shame – some of which are vaguely memorable, and some of which are merely creepy. The preponderance of bizarrely inappropriate English phrases inserted into the otherwise-Hindi lyrics is disconcerting at first and then becomes merely an additional layer of weirdness that holds the whole brilliantly ramshackle mess together, somehow. Other examples of so-bad-it’s-good filmmaking technique abound: Bystanders were apparently allowed to stand and gawk at the proceedings and in some cases even film their own record of the ongoing theatrics on their mini-DV cams while the actors gamely strutted their stuff from New Dehli to Paris and back. Bollywood, and Shaadi No. 1, in particular, obviously isn’t for everyone. The only thing exemplary about Dhawan’s directorial style is his energetic direction, which quickly becomes a case of too fast and too furious – you need a good long nap after experiencing the cavalcade of buffoonery and leggy Indian supermodels, but be forewarned: You may never dream in anything but neon kitsch again. Partner
Not reviewed at press time. This madcap Bollywood comedy stars Khan as a "date doctor" and his real-life best bud Govinda, who needs a little help from the doc.