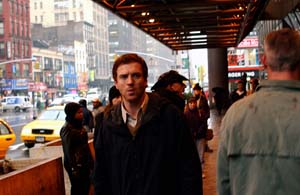 Lodge Kerrigan is one of the great, though largely unheralded, filmmakers of our time, and with Keane, his third feature, he finally shows himself to be in full command of his uncompromising talent. Kerrigan’s movies (Clean, Shaven; Claire Dolan) are not for the squeamish. His protagonists have been schizophrenics and self-destructive obsessives – people at the ends of their rope or teetering on the edge of insanity. Unstable, unpredictable, unfathomable, and because of these qualities Kerrigan’s characters generate stories filled with tension and suspense. Kerrigan’s films become thrillers in the purest sense: His characters create dangerous situations that become further untethered by the unpredictability of their actions. In his two previous films, Kerrigan helped us to get inside of each character’s mindset, providing a visceral sense of the madness that encompasses them. With Keane, the filmmaker makes the leap into creating a true psychological thriller, although it should be said that the film will still not be for all tastes. The character of Keane is the type of person we prefer to keep at a distance, onscreen as in life. In fact, the opening scenes show William Keane (Lewis) in full pandemonium mode, skittering through New York’s Port Authority bus terminal showing a news clipping about his 6-year-old daughter, who was abducted from the terminal six months earlier, to counter attendants or anyone who’ll listen. Most respond kindly but extract themselves from Keane’s presence as quickly as possible. We gradually learn that Keane continuously returns to the scene of the crime. He lives on disability in a rundown transient hotel in Jersey when he’s not sleeping like a derelict on the street. He sometimes tries to drown his sorrow with beer, cocaine, and anonymous sex, and he talks aloud to himself almost constantly. His rant reveals that he’s aware that he needs to make himself look presentable to search for his daughter, and he stops to buy the girl a new dress. We wonder whether the child really exists, or whether he actually had anything to do with her disappearance. How can we trust the reliability of his story? Yet if his tale of woe is accurate, this father has every reason in the world to be out of his mind with grief. Largely filmed with a hand-held camera by DP John Foster, Keane is always tightly framed in the shot, with little in the foreground and soft focus in the background. We are totally within Keane’s unstable world, and it’s an extremely unpleasant and precarious place to dwell. After a while, a down-on-their-luck mother and daughter (Ryan and Breslin) move into Keane’s hotel and a friendship forms, and eventually Keane is asked to babysit the 7-year-old. Although he’s able to pull it together for a bit and appear quite sane, we inevitably wonder what will happen in the long-term. There’s not much more storyline to this thriller than this, yet it’s a nail-biter all the way. Lewis (Band of Brothers) delivers a sensational performance in a movie that is thoroughly dependent on his work. Actually, the film is more of a three-way affair among Lewis, Kerrigan, and Foster. They sink in their hooks and don’t let go of the viewer until the very last minute. Kerrigan has found a way to preserve the insularity of his protagonist’s point of view while keeping the needs of the audience in mind. 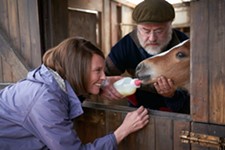 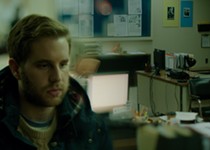