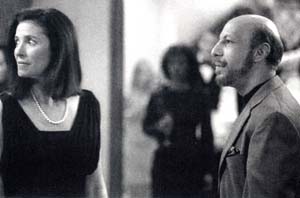 The Houston-based filmmakers behind this modest character drama make their share of rookie mistakes – director Roe has the lengthiest résumé, as an assistant director of television fare like the Kim Delaney vehicle Tall, Dark and Deadly – but they’ve also got a fine cast, a lot of heart, and a healthy disregard for Hollywood rules. It’s marketed (and to an extent, unfortunately, executed) as a thriller, but the movie is really the story of how a family is unraveled by grief, told in an unhurried style without a lot of artificial drama or platitudinous sentiment. Matt (Avari) is a workaholic widower expecting a visit home from twentysomething son Sam (Penn) and his new girlfriend (Sheth). Family friend April (Rogers) is also in town, but the mood is grim as Matt awaits his late wife’s birthday, the first to pass since her death. The story doesn’t give its characters much to do – there’s a party with mutual friends, a picnic, a tennis match with a pushy colleague (Davies) – because the point of it is Matt’s reluctance to re-engage in life alone as the father of a grown son; there are no easy answers to his putative obsolescence. The film trades off between the perspectives of the parents and their children, and much of it is spent in the awkward moments of a family visit: Somebody sleeps too late and gets a cold breakfast in a kitchen full of resentment, plans are made and broken, you get to see how much your old room has changed or hasn’t. Perhaps fearing that there’s too little going on – there isn’t – the filmmakers pile on portentous flashbacks and a dreadful, thudding score. There’s not enough trust in the actors, who deserve more room in which to work. Avari, a Darjeeling native usually assigned to exotic-villain duty, is a prolific second banana but takes center stage here, and he’s marvelous: stiffly patrician and visibly lodged in his own orbit, just out of reach from his son, but watchably accessible. Rogers is in tightly wound sweater-set mode, but she still has a certain warmth to her. Despite the thinness of their characterizations, the leads seem like real people wandering through Houston’s achingly appropriate business-class demimonde at middle age. (An early lunch at Neiman’s is at one point discussed.) It’s too hit-or-miss to fully endorse, but Dancing in Twilight is an interesting example of the Third Coast milieu – matter-of-factly intercultural (it’s got a few scenes of Indian classical dance) and intergenerational. Never mind that its subject matter is so rarely attempted within the mainstream; its closest Hollywood cousin is the underrated Moonlight Mile. Were it executed with more confidence and steadiness, the film would recommend itself as a trip off the beaten path of ensemble drama. 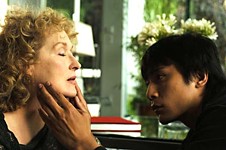 Dark Matter
A Chinese student studying theoretical cosmology in the U.S. also has a lot of dark matter occupying his head, and not even the assistance of faculty wife Meryl Streep can prevent it from taking over. 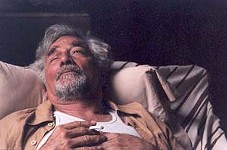 Three Days of Rain
A drama by debut filmmaker Michael Meredith is a Chekhov-inspired collection of semi-intertwined vignettes about a half-dozen or so depressed people living in Cleveland, and features an impressive cast.