Boys and girls, here we have an animated family movie about being ugly, being tormented by your peers, being bad at sports, and being neglected by your parents, who are humiliated by your mistakes and idiosyncrasies, and that last part really hurts. It is funny at times – the teams for dodgeball break down into "popular" and "unpopular" – but Chicken Little is painful to watch for all ages, despite a voice-talent roster to make the angels weep. (Wallace Shawn! Harry Shearer! Fred Willard! Adam West! And the granddaddy of them all, Don Knotts!) The story’s all over the place – the junior novelization I read with my three-year-old at his insistence doesn’t make a lick of sense either – and the movie rips through its 80 minutes of screen time with such frenzied insouciance that the fancy visuals barely register, as if animated family fare can be cranked out on somebody’s lunch hour and the real work is in the marketing. When bespectacled Chicken Little (Braff) gets conked on the head with a mysterious octagonal piece of sky, he becomes the laughingstock of Oakey Oaks, a sylvan suburb populated by anthropomorphic animals. For all of Disney’s attempts to vivify its setting (which is pretty clever, actually) with CGI technology, the movie flings us straight into Chicken Little’s attempts to win the affections of his distant father (Marshall) by becoming the star player on the baseball team – a position currently held by Foxy Loxy (Sedaris). But the falling sky still looms overhead, and it isn’t long before another fragment crashes down on Chicken Little’s dreams of being a well-liked and respected guy. I will not reveal the explanation for this phenomenon, though other reviewers have coughed it up readily, because within the enigma of the ostensibly falling sky lies whatever appeal the Chicken Little story possesses. (I would, however, submit that it is carried across the generations not because it is resonant and meaningful, but because parents enjoy saying "Turkey Lurkey.") The movie isn’t interested in whether Chicken Little is paranoid or even mistaken. It’s not even very interested in the psychology of panic. Rather, that little scrapper will have his day, so you can damn well bet the sky is actually falling. I will tell you that the film’s third act is dark and terrifying and involves "death rays" and the voice of Patrick Warburton. (There’s a dead mother, too, of course.) The pleasures to be had are found in the acting. There’s nothing wrong with Chicken Little’s gang of misfit animal schlemiels, except that Fish Out of Water (Dan Molina), who wears a tank filled with water on his head, gets all the good gags because he’s effectively mute. But director Dindal (The Emperor’s New Groove) doesn’t linger with his characters; he picks them up and knocks them down like pistons en route to the next big hairpin curve in the tale. It’s an antic journey with the doors locked and no stops permitted, sadly characteristic of the aggressively didactic, falsely whimsical nature of Disney’s modern age. 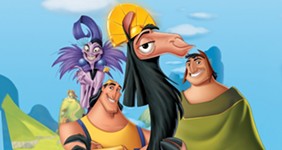 The Emperor's New Groove
Instead of venturing out to the theatre to see the Mouse's newest, I'd have been better served by staying home and watching a video copy ...