You don’t have to be Jewish to enjoy this light romantic comedy, but it helps. Younger directed the terrific Wall Street-wannabes flick Boiler Room in 2000, and this film, dotted with Manhattan landmarks like the Magnolia Bakery and the Cinema Village, plays at times like a more youthful ode to the city along the lines of Woody Allen’s Manhattan: It replaces Gershwin with Jay-Z (and, for a moment, Coltrane), while turning the tables on the Allen and Mariel Hemingway May-December romantics. Here, it’s the 37-year-old divorcée Rafi (a luminous Thurman who simply hasn’t looked this beautiful or poised in a long, long time) who, at the behest of her analyst Dr. Metzger (Streep), strikes out to discover what she’s been missing while wed to a schnook these past nine years. As fate and the vagaries of romcom screenwriting would have it – the excellent scriptwork here comes from Younger as well – what she’s been missing is some much-needed 23-year-old shvantz and its attendant all-encompassing Jewishness that arrives in the form of aspiring artist David Bloomberg (Greenberg). After a chance meeting in a theatre line while Rafi’s seeking solace from her gay fashionista pals, the pair hook up for dinner, an event that goes so well they begin toppling into love. But, of course, there’s that age thing, which runs skirmishes on their lovestruck, moony smiles every chance it gets. As Rafi confesses to her shrink, "Shouldn’t I be worried?" Dr. Metzger’s answer, essentially, is no, get out there and sow those wild oats – after all, they’re both in their sexual prime (hence the film’s title). What nobody yet realizes (and although the revelation arrives early in the film, this next sentence constitutes a spoiler, so beware) is that young David is in fact Dr. Metzger’s son. Which suddenly opens the film up to a whole new world of flinchy acting technique for Streep, who can wring more laughs out of a single facial twitch than almost anyone else. The film’s central question then branches out into one of doctor-patient ethics in addition to the propriety of the character’s ages, and from there to a ribald, no-holds-barred examination of everything from a mother’s love and its implied boundaries (and as any Jewish kid’ll tell you, there are precious few boundaries in a Jewish family) to why men tend to stray for younger women ("There’s something to it!" exclaims a carnally blissed-out Rafi). Younger’s film has a wise way about it; he rarely takes the easy way out, whether he’s touching on inter-religious relationships (Rafi is a gentile), the vague borderline between being a young man and being a man, or the sanctity of one’s own space, however tiny, in the Manhattan real estate market. What makes Prime work as well as it does, though, is the genuine sparks between its two lovestruck leads, the sweet-natured but socially and emotionally post-adolescent David and the sensual, worldly Rafi – they couldn’t come from more distant backgrounds had they just dropped in from Mars, Venus, or even Boise. Again to its credit, Younger’s film has a bittersweet cast hanging over the proceedings; with a mix of social and religious milieus such as this it’s difficult to imagine things working out in anyone’s favor, and director and cast are smart enough to not shy away from a romantic comedy that can only end, if not badly, then at least in the melancholy tears of lessons hard won. 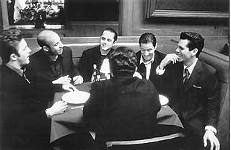 Boiler Room
“People that tell you that money is the root of all evil don't have any,” says the Boiler Room's power-talking recruiter Jim Young (Affleck), and ...