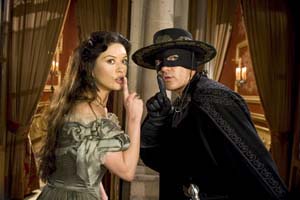 The Legend of Zorro

Here’s a neat party trick I came up with the other evening: Take The Legend of Zorro leads Banderas, Zeta-Jones, and Alonso and replace them with Brendan Fraser, Rachel Weisz, and Freddie Boath; insert the name "Im-Ho-Tep" whenever anyone in The Legend of Zorro adds extraneous syllables to the word "California"; and then confuse ancient Egyptian legends with the writings of Johnston McCulley. Presto chango: Zorro’s secret identity is revealed, and it ain’t Douglas Fairbanks. (Note: This can also be performed with chilled maraschino cherries and Guy Williams, but the results are far less zesty.) What started out as a promising return to form for that mythic Mexican buckler of swash has, in a single sequel, devolved into The Mummy Returns-lite, or, if you prefer, Spy Kids 2: Island of Lost Box Office. Adding a tyke to the mix, in this case Alonso’s Joaquin de la Vega – pint-sized scion of pop Alejandro, aka Zorro – is as old a Hollywood standby as the hairs on Freddie Bartholomew’s cadaver’s chin and twice as ticklish. While it may add a key demographic to the moviegoing mix, it also just as often alienates those fans who found the original material just fine sans Fauntleroy-isms, as is the case with this puling, strained-beets-and-formula sequel to 1998’s top-notch The Mask of Zorro. Whereas the Zorro of yore was a cunning subversive with libidinous guerrilla panache literally leaking from his very pores – Ché with a bullwhip – this new take is something akin to a Bizarro World, Hugh Beaumont version: Leave It to Zorro, indeed. The interchangeability of plotlines between the aforementioned franchises is no mistake, either. Like the childhood add-ons, the narrative elements are more or less the same, e.g., parents get in trouble while acting like kids, and kids fly into action to save the day, which makes for a pretty freaky Friday any day of the week, and offers guaranteed relief to harried moms and dads utilizing the matinee as a weekend babysitter. The Legend of Zorro so erodes the original character it’s as though we’re receiving a glimpse of Don Diego’s hidden nightmares: lusty adventures replaced with jealous conniption fits and quality time with the li’l scamp. It doesn’t take too much effort to push the whole sagging mess into Freudian territory, but somehow I doubt that’s what director Campbell had in mind. (Then again, his directorial debut was something called The Sex Thief, so who’s to say?) There are precious few things for a Zorro fan – or a film fan, for that matter – not to loathe about The Legend of Zorro, not least of which is the movie’s central conceit of a shadowy New World Order hellbent on denying statehood to California, and led by Sewell no less. It’s a page torn from The Wild Wild West’s playbook, while Zorro’s sitcomic divorce from long-suffering wife Elena and his consequent ornery bachelorhood is straight out of the Bill Bixby Guide to Modern Romance. "People let me tell ya ’bout my best friend." Thanks, no, I’m busy sharpening my rapier. 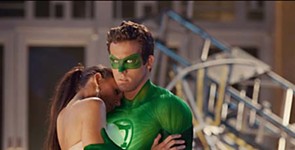 Green Lantern
The beloved comic-book hero rediscovers his powers on the big screen.