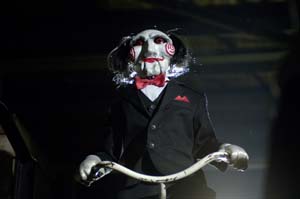 If you’ve ever wondered when the hell somebody’s going to get around to updating the eyeball scene from Buñuel’s Un Chien Andalou, then buddy, your time is nigh. "Oh yes, there will be blood," promises Saw II’s tagline, and, for once, the tease is fulfilled … and then some. Saw II is a nasty piece of work, reveling as it does in outright sadism and dancing dangerously close to having no idea in its grimy head other than how best to mindfuck its characters into oblivion. At the latter it does a fine job, dispatching an octet of strangers, who have awoken imprisoned in the booby-trapped house of horrors of serial killer Jigsaw (Bell). Jigsaw’s modus operandi, carried over from the first film, is to awaken the nascent survival instinct in his prey, thereby making them better people as a whole. It’s something of a flawed bill of goods he’s selling, however, as his elaborate contrivances and befuddlements – some worthy of Frank Gorshin’s Riddler, some less so – continually net him not the finer specimens of humanity he allegedly seeks, but shell-shocked, thousand-yard starers and rat-food tartare. Somebody has to be the badass, of course, and in Saw II the vacancy is overfilled by Wahlberg’s morally bankrupt detective Eric Matthews, who busts his own son on a minor charge in the first reel and then spends the remainder of the movie attempting (via an impressive array of furrowed brows, spittle-flinging verbal harangues, and sundry bad-cop/worse-cop outbursts) to save him from the clutches of Jigsaw. Whether or not you’ll enjoy Saw II will have much to do with your enjoyment of the first film, although it’s no more a prerequisite than being a fan of The Texas Chainsaw Massacre is for enjoying The Texas Chainsaw Massacre 2. Like that gut-busting sequel, Saw II strives to overwhelm its audience through sheer overlapping horrors, and it succeeds to a large degree. There’s far more meat on these bones than on James Wan’s original film, and thus more to be flayed off, and director Bousman and returning screenwriter Leigh Whannell appear to be having some wicked good fun inventing ever more elaborate and Herculean tests for the characters. Led by Smith’s wiry ex-junkie, another holdover from Saw, they scurry around trying to find egress like vermin on a sinking ship – and they’re about as sympathetic. And therein lies Saw II’s problem: With nary a decent, connective character in sight, the film quickly becomes little more than a strenuous battle for survival among the already damned. Bousman’s direction is of the bleach-bypass, amphetamine-edit variety, making everyone in the picture appear as if they’ve already been dead a day or two from the get-go. To its credit, the film rockets toward its conclusion with scant downtime. It’s come and gone before you even know it, and, like death, that’s a good thing. 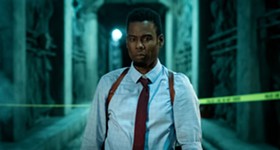 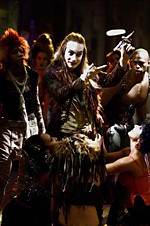