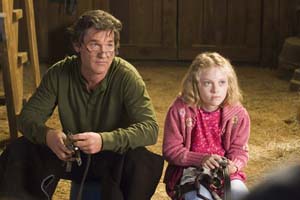 Dreamer: Inspired by a True Story

You could call it Seabiscuit Jr., but this horsey DreamWorks heartwarmer does something very surprising in spite of its underdog sports-movie formula, its sun-dappled beauty shots of Kentucky thoroughbred farms, and its shameless emotional manipulation of innocent viewers who are jerked between the thrill of victory and the agony of defeat in almost every scene: It manages to be a watchable, even enjoyable movie about and for girls, and in our world of candy-coated sparkly pink crap, that’s a rare and commendable thing. Dreamer is not – I repeat, is not – challenging or avant-garde cinema; Gatins (in his directorial debut) is the scribe of Coach Carter and Hard Ball, and he’s never met a cliché he didn’t like. Upon its "true story" (actually that of racing mare Mariah’s Storm, a filly that won several Grade III-stakes races after recovering from a broken leg) Gatins has superimposed plucky Cale Crane (Fanning), a Kentucky grade-schooler whose father, Ben (Russell), brings home a broken-legged horse he’s been training, refusing to have her put down after she falters on the track. Cale falls in love with the horse (animal actor Sacrifice), feeds her Popsicles, and Never Gives Up. You can pretty much take it from there. But the movie has a lot going for it if you look at it right: Hayseed farm kid and broken-down abused animal join forces to fight Big Money assholes and beat them at their own game. Gatins cuts the sugar by surrounding Fanning with a who’s-who of crusty old codgers, most notably Kristofferson, who arrives in the film scowling and backlit, like he’s going to start thrashing someone with his cane. He’s magnificent. Cale has a mother (Shue, Botoxed into a rictus of perpetual surprise), but the movie isn’t interested in her, so Gatins assigns her to a roadside diner and brings her back whenever Russell and Fanning need a cheerleader for their crazy dreams. Gatins does regard the father-daughter relationship seriously, and the roles are well-acted. Poor Fanning takes a lot of guff for being a snaggle-toothed, googly-eyed child actor, but she really is awfully poised; maybe part of the problem is that Hollywood doesn’t like children and is always squeezing them into outlandish situations (imperiled by aliens, having macabre visions with their imaginary friends) instead of letting them be actual human beings. In one scene, Ben is made to read a school assignment Cale has written. Of course it’s a story about magical horses and faraway kingdoms while actually being about her dad (she is, after all, a little girl), but the scene works because Russell is so low-key, so gruff and wizened, with just the tiniest little crack in his Carhartt farmer facade for his feelings to seep through. In other words, Dreamer is worth several Princess Diaries or Lizzie McGuires. It doesn’t have any shopping montages. Fanning never once talks on the phone – to anyone. It makes you realize how truly abysmal, how truly bankrupt and nauseating, most mainstream entertainment for young girls is. 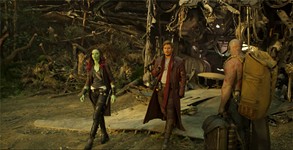