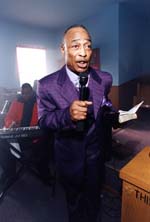 I once knew a hepcat who believed he had spied the image of Jesus inexplicably burned into a corn tostada. Upon closer inspection, it turned out to be Elvis. Costello. Which just goes to show that human perspectives are entirely subjective, none more so than those obscuring the issues – or revealing them – via the prism of faith. One man’s king is another man’s hillbilly hound dog, crown of thorns or blue suede shoes, redemption or rock & roll. Davis’ slick, locally produced film, adapted from the stories of Christopher Cook, plunges brain first into the font of perceived wisdom vis-à-vis small-town religious mores of a singularly Texan persuasion, and comes up with some insightful revelations – most of which will be familiar to anyone who has spent hard time in such far corners of the universe as Amarillo, Waco, or Fort Stockton (a town so far afield of urbanity that it might as well be situated on the dry side of Tatooine). Ambitious in a way few mainstream films manage to attempt, Screen Door Jesus has smarts to burn, tackling assorted questions of faith through a sprawling ensemble cast, knitting a knotty skein of perceptions as varied as the multitudes of religious beliefs generally filed under the all-encompassing rubric of Christianity. Cynthia Dorn’s town matriarch, old Mother Harper, is the first to note the appearance of the titular, mottled savior unceremoniously gracing her front door. As befits an aged penitent toiling in both the literal and figurative gardens, she gives a holler and promptly keels over. She exits only to arise soon after and discover she’s the toast of her nonsecular neighbors, who flock in droves to witness the alleged miracle and speak in tongues, seek blessings, or, in the case of idle teen Robroy (Williams), just hang out trying to see what all the fuss is about. Robroy has good reason to wonder; his free-spirited mother, Joycie (Moore), is wasting away from a mysterious illness possibly contracted while skinny-dipping. The possibility of divine judgment is high on Bible-thumping mother-in-law Momma Nell’s (Franchelle S. Dorn) list of possible explanations, and her unshakable belief that hospitalization is not a part of the Lord’s divine plan is likely going to result in the death of Joycie. There’s also the story – it’s almost a parable – of town mayor Huckaby (Dillard), a Boss Hoggish scoundrel with eyes for blazing crimson strumpet Ronette (McAlister), who in turn has a past, of sorts, with ex-con and bar-band howler Duane (Dalton). On the other side of town, local lawman Lou Dawson (Watford) is thinking about playing house with the drop-dead sexy but painfully pious Sharon (Kalanj), while guarding a gaggle of gay Christians who’ve chosen to convene in the town to discuss matters of faith and homosexuality – which, of course, doesn’t sit too well with the local strata of God-fearing homophobes. Screen Door Jesus (which played previously in Austin during the SXSW Film Festival) is overflowing with storylines, some of which fare better than others but all of which are given ample time to play out. There’s more than a hint of Robert Altman’s iconoclastic and crowded films, but Screen Door Jesus succeeds without the arch, overlapping dialogue and narrative machinations of, say, Nashville. It’s a knowing, dare I say sweet, little film that takes pains to let the characters speak for themselves, never rallying behind an implicit religious message, which may be the best message of all. (Writer-director Kirk Davis, and actors Marc Dalton, Randy Stripling, and Richard Dillard will be in attendance at the Friday evening shows.)