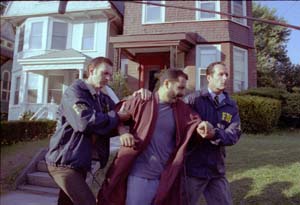 "I have no interest in your brotherhood," the wrongfully imprisoned though American-educated Hassan (Akhtar) tells his extremist cellmate, scorning an offer of assistance and enduring three years of torture at the hands of his English-speaking inquisitors that leaves him reborn both physically and spiritually. A Pakistani by birth, he exits Karachi’s penal system after three years a thoroughly radicalized time bomb, the poster boy for bad times ahead. Next stop Manhattan, where Hassan moves in with the childhood friend Sayeed (Bamji), whose immersion in the great American melting pot is buoyed by his family but repulses Hassan, once a nonpracticing Muslim but now an anonymous holy warrior who unrolls his prayer mat five times daily and views everything through a strict interpretation of the Koran. Hassan’s ulterior motive for coming to America is grim fare indeed: He’s one cog in a plot to detonate a series of bombs in New York City, although the initial date is scrapped after one member of his cell is picked up by the FBI. This change of plans does little to bolster Hassan’s faith in what he sees as "the struggle," especially after a co-conspiritor appears more interested in hanging out in strip clubs and knocking back a few while ogling the flesh parade. Undaunted, Hassan waits for another anonymous phone call from his terror cell, taking a job as a cabbie while living in the omnicultural bowels of the great Satan. It’s thanks to Akhtar’s standout performance that The War Within is as electrifying as it is; his transformation from upper-middle-class citizen of the world (he’s initially picked up in Paris) to all-American nightmare is revealed through the set of his features, the way his once-open eyes go hooded and harsh, and the clipped, almost military bearing he brings to his new sense of purpose. "What happened to the kid who loved Duran Duran?" asks Sayeed’s daughter Duri (Sen). The answer to that lies dead in a filthy cell somewhere in Karachi; Hassan version 2.0 is buggy as all get-out, but focused with laser intensity on the end over the means. Castelo’s film is streamlined, portraying a terrorist’s point of view in a jarringly matter-of-fact manner, but Hassan’s radicalization is given short shrift. There’s little revealed, either via dialogue or imagery, that explains in any detail the metamorphosis of a mild-mannered, university-educated engineer into an engine of divinely inspired retribution, apart from a handful of prison flashbacks and a passing glimpse of Hassan’s back, scarred in the telltale, elongated weltings of an acetylene torch. It’s enough, though, as is Akhtar’s spectacularly unshowy performance, which captures the subtle shadings and nuances of what would otherwise be – and most probably, most unnervingly, is – just another face in the polyglot crowd, unseen but watching, and waiting.