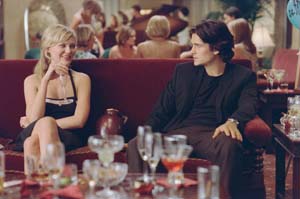 You can’t go home again, but if you do, you’d better discover yourself in the process or risk consignment to the slush pile of cinematic also-rans. This hoary Hollywood trope has gotten the treatment from Frank Capra to Zach Braff, and while the ambitious Elizabethtown seeks to retill those once fertile fields, its two-hour-plus running time borders on the interminable as Bloom and Dunst’s relationship inches forward with all the zip of a salted slug. It’s a black day for Seattle resident Drew Baylor (Lord of the Rings’ Bloom), whose crowning moment as the concept designer behind a fantastically overreaching sneaker turns out to cost his Nike-like company a billion dollars in lost revenue. The flopping footwear incident is only the beginning of Drew’s troubles, however. (To be fair, it is a spectacular downfall – the shoe in question looks like a manta ray – providing a juicy cameo from Baldwin as a wildly superficial CEO obviously patterned on Nike founder Phil Knight.) Adding to his woes, Drew’s ingenious, Rube Goldberg-esque suicide attempt is aborted when his sister Heather (Greer) calls with news of their father’s death in his hometown of Elizabethtown, Ky., and urges him to handle the responsibility of dad’s cremation. Drew acquiesces and promptly meets quirky Southern belle-cum-stewardess Claire at 30,000 feet, setting up a third-act romantic denouement that appears to be a given but which takes such a circuitous route getting there that any interest in it has long since gone the way of Drew’s dad. Once in Elizabethtown, hipster Drew is forced to recalibrate his internal code to "eccentric" as an extended family of neo-Gothic oddballs comes out in full force to celebrate the passing of the guard and to remind Drew that only in the Hollywood version of real life can so many quaint Southerners be so gosh-darn accepting of outsiders while also reminding him, and us, that Elizabethtown is more than a series of GPS coordinates: It’s also a state of mind. You could say the same about Pyongyang, I suppose, but frankly a nuclear-enabled Elizabethtown would be a far more terrifying vision (now there’s a movie I’d pay to see). As native color flocks around the prodigal son in the form of kooky, dare I say zany, blood kin, Drew and Claire flirt and frolic, stopping the film deader than dear old dad midway through for an extended montage of faux-witty and pseudo-revelatory late night pillow talk rivaled only by, um, Pillow Talk for sheer romantic flimflammery. Unfortunately, there’s none of the electricity of that fine Hudson/Day pairing on display in Crowe’s film. The slight, vaguely morose Bloom runs emotionally widdershins to the fizzy, hyper-charming Dunst, and only when the film turns into a road movie in its final half hour does Elizabethtown finally blossom into something of interest to anyone not actually living in that real Kentucky hamlet. (The film’s Web site crows, "We’re more than a movie!" but I have my doubts.) Drew is the anti-Lloyd Dobler – he doesn’t say anything much at all, leaving Claire to fill in the blanks and the rest of us wondering where the attraction is. Dunst is an immensely appealing actor, though, and it’s thanks to her perpetual dimples and wide-eyed enthusiasm that the film is as bearable as it is. When she’s off the screen, Elizabethtown goes dark and broody, stranding us with the morose Bloom during a third-act road trip that goes everywhere and nowhere at once.