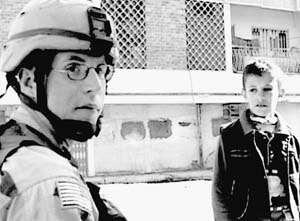 It’s early 2004 in Fallujah, Iraq, and Occupation: Dreamland’s filmmakers are bunked with the Army’s 82nd Airborne Division, who’ve been charged with the mission of keeping the peace in Saddam’s old Sunni stronghold. These young soldiers, most of them in their 20s and all of them male, have only a tentative grasp on how to accomplish this mission despite following their orders precisely. They head out every day into the blistering desert sun with their weapons and camouflage and interact with the Iraqi citizenry. Nobody’s very happy: not the Iraqis or the Americans, but there’s little either side can do but listen patiently to the litany of complaints, explanations, and promises. The soldiers search houses and alleyways for signs of Sunni resistance, as the cameras faithfully watch them manage a torrent of adrenalized feelings ranging from anger and fear to duty and sheer embarrassment for behaving like this in a stranger’s home. Filmmakers Olds and Scott had amazing access to these soldiers, who open up to them with their innermost thoughts while in the barracks (an old Baathist resort nicknamed Dreamland) or on patrol. We discover the reasons for enlistment are numerous – money for education or a drifting sense of purposelessness – but rarely does enlistment derive from a gung-ho march toward militarism. Their political feelings vary, as do their ideas about whether the United States belongs in Iraq. Yet each man takes his mission and his job seriously. This is a documentary about the day-to-day operations in a war zone. The filmmakers go with them on their patrols through the city, as snipers fire around them and IEDs explode. It’s their job, and most days it’s better not to think about it too much. Still, the thoughts and experiences captured in this film reveal much that we haven’t seen in all the action-oriented news footage and short-term embedded correspondence from the war. Occupation: Dreamland shows the daily grind: the quotidian aspect of getting up and repeating the same gestures, day in and day out, while the recruitment officers wait in the wings for a chance to browbeat the enlistees into reupping. It’s horrifying and absurd and just as you begin to believe that maybe this group’s general optimism has a chance for success in Iraq, the 82nd Airborne is shipped out to make way for the Marines, who’ve come to fight the bitter battle against the insurgency in Fallujah that became familiar fodder in our daily news. What we’ve witnessed up until now is the quiet before the storm, a pocket of lucidity in the chaos. It’s an unsatisfying conclusion, but hey, that’s war for you. (Garrett Scott will be present at the Saturday night screening for a Q&A. For last week’s Texas Documentary Tour interview with Scott see austinchronicle.com/issues/dispatch/2005-10-07/screens_feature.html.)

Fixer: The Taking of Ajmal Naqshbandi
...