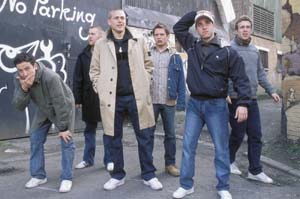 Seeking perhaps to batter away the dreaded Hobbiton typecasting of his Lord of the Rings trilogy, the elfin Wood has transformed himself into an Orc swathed in the bloody claret colors of the UK’s legendary West Ham United Football Club. American roughnecks who think their weekend NFL and rugby scrums and flaming NASCAR wallbangers are the height of legally sanctioned manly violence might as well be playing with dollies when compared to the ferociously bloodthirsty, off-the-pitch street battles and territorial pissings that mark the psychotically testosterized world of British football hooliganism (aka "supporting the home team"). As a metaphor for human conflict on a global – or any – scale, there’s no finer parallel than sport of this sort, and Hooligans, with its frothy crimson tide of fist-in-mouth male bonding and lager-lout bad manners approaches the sociologically poetic sloganeering of the Smiths at Morrissey’s most hooligan-lovestruck. Wood plays Matt, an American ex-pat who relocates himself to Old Blighty after being banished from Harvard’s ivied halls when his preening roomie sets him up as a drug-scandal patsy. Moving in with his sister, Shannon (Forlani), the naive, button-down Yank quickly finds himself passed off to Shannon’s brother-in-law, Pete (Hunnam, a dead ringer for a Brit Brad Pitt), who with his shorn head and Fred Perry tops, bears all the hallmarks of Bad News. Casting about for friendships amidst unfamiliar topography, Matt finds himself at first the butt of jokes, but is inexorably sucked into the whirling black hole of outright thuggery, giving, to his own comical surprise, as good as he gets and cracking skulls with something approaching gleeful abandon. Green Street Hooligans is at its best when it goes down to the pub and captures, quite flawlessly, the grotty intoxication of these mad, bad, dangerous-to-know Hammers fans hoisting incalculable pints, singing indecipherable anthems, and preparing, again and again, to war on the terraces of the home turf for nothing much at all (though in their minds, of course, it’s always Death or Glory). Director Alexander gets the vibe spot-on but goes out on an unsafe limb in the third act when she paints Matt as a reluctant chronicler of his emergent pastime. There’s little backstory, too, for the assorted villains, although one key scene at Matt’s day job – he’s a primary school teacher, of all things – is both revealing and hilarious. Fans of Frodo may find themselves on unfamiliar narrative ground here, but the ongoing struggle between good and evil within one individual heart is likely to seem not unfamiliar.