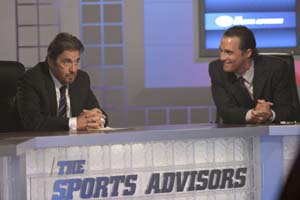 Two for the Money

Pacino does what Pacino does in too many of his movies these days: bluster hyperbolically and tutor some kid in the mechanics of his trade. In Two for the Money, the kid is played by McConaughey and the business is a tout service wherein prognosticators offer tips on the Vegas betting lines. Other Pacino movies of this ilk include The Recruit, in which he initiates Colin Farrell into the CIA; Insomnia, with Martin Donovan playing the junior detective to his senior; Donnie Brasco, with Johnny Depp as the secret infiltrator of Pacino’s Mob operation; and Scent of a Woman, in which Chris O’Donnell plays the naive preppie to Pacino’s hoo-ha-ing retired colonel. But the film that Two for the Money most resembles is Devil’s Advocate, in which Pacino plays the Mephistophelean lawyer to Keanu Reeves’ new legal recruit. In this new movie, Pacino plays Walter Abrams, the owner of New York City’s most influential tout service. He recruits young Brandon Lang (McConaughey), a college football player who blew out his knee and now pumps weights and works for a Las Vegas 900-number phone service providing weekly betting tips. Brandon is uncannily accurate in his picks and is ready to step up when Walter sends for him in New York. Walter gives Brandon an apartment in his Manhattan apartment building where he lives with his wife, Toni (Russo), and 6-year-old daughter. He teaches the young man everything he knows and at times even says he wants them to have a father-son relationship. But – big surprise – Brandon’s good luck eventually dissolves as quickly as it inflated. Yet the drama along the way is surprisingly bereft of tension or dramatic interest. A rival character played by Piven is given nothing to do, and a subplot in which Assante plays the world’s biggest gambler is similarly pointless. For all the talk of wins and losses in the $200 billion gambling industry, the movie provides very little in the way of specifics and brass tacks (or knuckles). We learn that Walter is an ex-gambler with a bad ticker (see – he has a heart), and Toni is a former junkie (although the film never answers the question of why she still operates a beauty parlor now that she and Walter have acquired all this wealth). McConaughey’s ripped chest is pleasant to watch as we’re given ample opportunity to observe, but it still seems like there should be more tension in Two for the Money than simply watching grown men bite their lips as they watch pro games on TV monitors. The direction by Caruso adds little to the dynamics, although the script by Dan Gilroy offers the occasional gem. Nevertheless, Two for the Money is hardly a cineplex bargain. 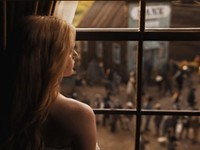