The first 15 to 20 minutes of this documentary are solid gold. Browne encapsulates the history of bowling in modern America from its heyday in the Fifties and Sixties to its decline during the Seventies to Nineties. He puts into play some key ideas for his documentary: The glory days were a time in which more Americans bowled than voted, and the sport is identified with blue-collar workers who more often than not are thought of as overweight smokers and drinkers – hardly the stuff of world-class athletes – and the growing privitization of American’s leisure-time activities. Clips from the movie Kingpin and the TV show Married With Children punctuate the filmmaker’s points. From the birth of the Professional Bowling Association in 1958 to ABC’s final broadcast of PBA competition in 1997, bowling was in the American spotlight. A League of Ordinary Gentlemen picks up in 2003 when three retired Microsoft executives purchase the PBA for $5 million and hire Nike exec Steve Miller as the association’s new CEO. They seek to return bowling to its former glory. Some obvious strategies involve modernization of the league’s marketing techniques and the development of star players. After the film’s great introduction, however, the documentary devolves into fairly lackluster observations from some of the key players during this reorganization year. We see them on the road for weeks at a time, a job requirement that’s rough on family life – no surprise. The men talk of the old days and the potential for new ones, but little of what they say matches the insights of the film’s opening minutes. We spend time on the road with Pete Weber (son of renowned champion Dick Weber), Wayne Webb, Chris Barnes, Walter Ray Williams Jr., and more. But without the social questions posed at the beginning of the film, the footage of the competition is not likely to be strong enough on its own to lasso in a new generation of players. 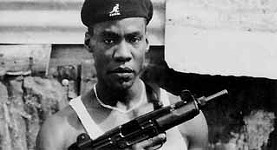 Third World Cop
In all likelihood, few of us would be able to name any Jamaican movie other than Perry Henzell and Jimmy Cliff's The Harder They Come. ...