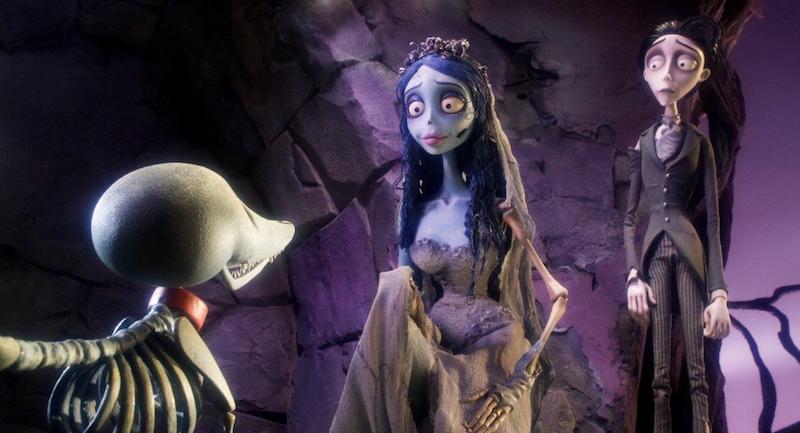 The dead have more fun than the living, again, in Tim Burton’s new stop-motion animated feature, a gift to gothlings everywhere and as exquisitely crafted as one of Federico’s post-mortem still lifes on Six Feet Under, and just as melodramatically melancholic. It’s also arguably Burton’s most self-assured turn behind the camera in ages. Since his last truly great film, 1994’s Ed Wood, Burton has seemingly dug himself a grave he can’t quite get out of, trading in his lovingly rendered, childlike fondness of morbidity for more adult emotional fare that has neutered much of his recent work (Big Fish, despite its cavalcade of oddballs, was a snooze) and made one pine for the subtly subversive hijinks of Pee-wee’s Big Adventure and the gloriously life-defiant Beetlejuice. In Corpse Bride, Burton lets it all hang out once more and coupled with Mike Johnson’s seamless animation – he did the terrific "Devil Went Down to Georgia" animation that popped up in one of Spike & Mike’s midnight shows a few years back (see "Irreplaceable," Screens, September 23, 2005) for an interview with former Austin resident Johnson) – it makes for a splendid All Hallows treat. As in the director’s previous animated outing, the now-classic The Nightmare Before Christmas, this is a musical romantic comedy with dead things, and while Danny Elfman’s jaunty tunes fail to engage as memorably as in that film, John August, Pamela Pettler, and Caroline Thompson’s script is pure Burton, marrying (literally, in this case) the worlds of the dead and the might-as-well-be-dead to a Hammeresque tale of love, murder, and the redemptive power of, um, death. Depp voices Victor, a shy, retiring, proto-Victorian type who panics on the eve of his arranged marriage to the equally luminous Victoria (Watson) and ends up wedding Carter’s Corpse Bride instead. The understandably flustered groom is immediately initiated into the Bride’s waggish, song-and-dance-filled underworld of the dead, but it’s the stiffs upstairs who seem most removed from life, including an aged cleric marvelously essayed by gothic icon Christopher Lee and two sets of bewildered parents (among them an unmistakable Ullman). Grant and Gough – another onetime Hammer Films luminary adopted by Burton – both round out the bracing, witty dialogue, but the true stars of Corpse Bride are the cinematography by Pete Kozachik (James and the Giant Peach) the art direction by Nelson Lowry, which give Burton and Johnson’s film a magnificent polish, making it eye candy of the highest order and as eminently watchable as a hilltop Halloween pyre or a Dia de los Muertos parade run amok. In a clever bit of reversal of artistic fortune, Burton’s moribund land of the living is painted in a thousand shades of gray, while the exuberantly vibrant realm of the dead explodes with all the colors of the dark, luscious violets colliding skull-first with lachrymose greens and deep Argento reds. It’s enough to make you wish you could dump that sad sack of choco-bars and devour the screen instead, cinematographic calories be damned.