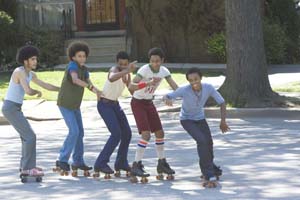 Despite a marketing campaign that appears bound and determined to make its subject look as grindingly dull as possible, Roll Bounce triumphs on almost all counts, hot-wiring a penchant for sports film clichés to some seriously spot-on Seventies nostalgia that looks and feels true not only in its attention to period detail but also in its all-important portrayal of teenage camaraderie and its attendant angst. Young (but not L’il) Bow Wow plays Southside Chicago rollerskating champ X (short for Xavier), who, along with his trusty band of low-rent buddies, spends the summer of ’78 mourning the recent death of his mother and the closing of his local skate palace by taking his A-game uptown and sticking it to the man. In this case, that would be the Rick Jamesian Sweetness (Jonathan) and his multiethnic coterie of pant-suited rollerballers, as unlikely a mix as the BeeGees at CBGB but almost assuredly as entertaining. Puppy love arrives in the form of Good’s all-grown-up girl-next-door Naomi, who hooks up with the endearingly reticent X at the behest of new-girl-on-the-block Sonya (Irvin), while X’s economically displaced dad (McBride) learns to love again even while the memory of his late wife still stings his eyes. At times, Roll Bounce feels as though it’s one long parade of coming-of-age film clichés after another, but Malcolm Lee’s tight, focused direction, coupled with a disarmingly irony-free script from Beauty Shop’s Norman Vance Jr. and some smart, funny performances from Wow and pals Khleo Thomas (as the mixed-race Mixed Mike), Troy (Paul Wesley), and Naps (Rick Gonzalez) help the film rise above any stereotyped profiling. Replete with nods to Seventies culture that go past the obvious (What’s Happening!! references) to the just plain cool (a poster of San Antonio Spurs legendary Iceman Gervin adorns X’s bedroom wall), Roll Bounce is the sort of teenage summer fare that just doesn’t get made that much anymore, a younger-skewing Hustle & Flow that’d rest easy on the bottom half of a Car Wash drive-in double bill. Never mind the immediately obvious comparisons to Fat Albert and the Cosby Kids – this is the real deal, and it shows up the likes of pre-Eighties Xanadu and Roller Boogie poseurs with a funky, grooving panache that’s all its own.