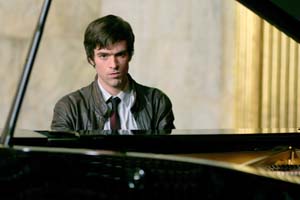 The Beat That My Heart Skipped

The Beat That My Heart Skipped, in an uncommon switch, is a French adaptation of an American film, namely James Toback’s 1978 debut Fingers, starring Harvey Keitel. The essential story is faithfully transposed from post-Mean Streets-era New York to contemporary Paris. It’s a character study of a young, 30-ish man torn between two seemingly schizophrenic career paths as either a mob enforcer or a virtuoso pianist. In this new French version, the man is named Thomas Seyr (Duris), and he works for his slumlord father (Arestrup), forcibly and violently evicting squatters from apartments or encouraging recalcitrant tenants to come up with the rent by releasing rats in the buildings or other such inducements. Thomas’ late mother was a concert pianist, and after a chance meeting with her former agent who offers him an audition, Thomas rekindles a desire to play piano. Like his forebear Jimmy Fingers in the Toback film, Thomas is a big fan of popular music, particularly girl groups, although the wonders of modern technology have made possible a sleeker version of the big radio Jimmy used to carry with him everywhere. Thomas begins taking lessons with a non-French-speaking pianist (Linh Dan Pham) to prepare for his audition, and begins to neglect his thug responsibilities and appointments. Also like Jimmy Fingers, Thomas is visibly torn between his filial allegiances to the "civilizing" legacy of his mother and the brutish influence of his father, with whom he has a complicated relationship that he pinpoints in the film’s opening monologue. Duris is very good as the noirish protagonist, holding our interest as his tension mounts with each passing scene. Yet it is hard to surpass the emotional range of Fingers’ young Harvey Keitel, whose agonizing ricochet between heaven and hell precedes his later – and more widely seen – embodiment of the psychically split Bad Lieutenant. The problem with The Beat That My Heart Skipped, as it was with Fingers, is that the gravity of the character’s psychological divide is clear after the first half hour, and both films add little in the next hour to deepen our – or the characters’ – understanding or entanglement. In addition, Toback’s first film is fired by a raw emotionality, which couples its primitive central conflict with a melodramatic verve that feels equally histrionic. Audiard’s film is undeniably infused with a greater sense of realism, yet this stark and elemental drama seems underserved by prosaic realism. Audiard, whose film Read My Lips is a favorite of mine, is to be admired for taking on this challenge and, as a result, reviving the much discussed but little seen Fingers. However, Audiard’s film is a grace note, a flourish that neither adds to nor alters the basic canon. 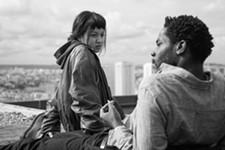