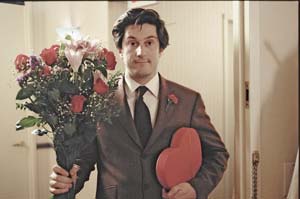 The Baxter is the other guy, the nice guy the girl settles for while she twiddles her thumbs, waiting for the leading man to step in. He’s the Bill Pullman, or better yet, the Ralph Bellamy (who got shucked not once but twice for Cary Grant); indeed, The Baxter pays affectionate homage to those swell screwball comedies of the Thirties and Forties. It begins, fittingly enough, at the altar. Lifelong Baxter Elliot Sherman (Stella’s Showalter, who also wrote and directed) looks to finally break his streak by wedding dream girl Caroline Swann (a bland Banks) … that is, until the reverend announces that pesky "just cause" clause and dream girl’s high school sweetheart (Theroux) storms the church. Elliot, in voiceover narration, stops the scene there and jogs us back to the beginning of Elliot and Caroline’s courtship, and never is the film quite so spry or beguiling as in these opening minutes, with its stylized, barmy dialogue, retro costuming, and knowing parade of romantic comedy conventions. If you’re amenable to this sort of thing, as am I, then I suspect Showalter, a first-time director, will have you in his pocket. Problem is, he doesn’t know how to keep you there. Just as soon as he sells us on this winsome, backwards-glancing universe of tweed, screwball banter, and a sweet, overlooked secretary just in from "Fergus Falls, Minnesota" (Williams), he starts to take a pencil eraser to the pastiche. Slowly, the characters begin to sound like people living in the year 2005, not 1945, and the effect is, if not jarring, then certainly draining on the film’s previous pizzazz. There’s still a lot to like here – the cast is packed with members of the comedy troupes Stella and the State, and noninitiates like Williams and Theroux are gleefully game – but the film never recovers its initial fizzy-pop charms, owing largely to pacing that turns positively molasses-slow in the second act. The biggest pitfall, however, is in Showalter’s characterization. Inherent in the film’s premise is a terrific opportunity to pull back the curtain on "the other guy" – to make a man out of what is typically just a plot device. But Showalter’s Elliot, self-described as the kind of guy who gets hay fever just raking the leaves, never breaks out of the Baxter cliché. Frankly, he makes a pretty good case for why the sad sack never gets the girl. 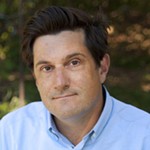 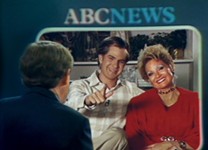 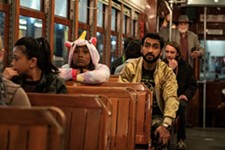