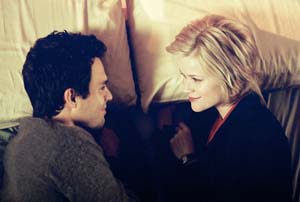 Forget that tired old Batman/Superman hypothetical – what inquiring minds really want to know is who’d win the Romantic Comedy Battle Royale: upstart Reese Witherspoon or grand champion Meg Ryan? Odds are still on Ryan by a perky, button nose, but Witherspoon’s winsome, charming turn in this lighter-than-air fare comes within a legally blond lock of snatching the heartstrings from Ryan’s exemplary romantic résumé. Just Like Heaven is just like the Cure in more than name alone; as in Robert Smith’s most audacious and memorable goth pop standards, it snatches joy from the teeth of despair and life from the beyond the pale, wrapping everything up in a methodically melodic and lyrically neat black bow before vaporizing beyond a veil of yesterday’s tears and tomorrow’s fairy-tale infatuations – it’s got a great beat and you can die to it. Despite its gooey marketing campaigns, which paint the film as something of a Lifeless in Seattle, Waters’ film is at its heart a grim affair, linking as it does two emotionally dead people in that most notoriously alive of American cities, San Francisco, and then having the nerve to make one of them truly, madly, deeply dead. Yes, we’ve seen this sort of fabulism before, and better done, too, but Just Like Heaven nimbly sidesteps the abundant clichés through sheer dint of the acting skills on display here. Ruffalo, the thinking-woman’s romantic ideal, is David, a heartsick widower who leases the tony hilltop home of the late Elizabeth (Witherspoon), a workaholic physician whose connection to the here and now was inauspiciously severed in the squeal of rain-slicked brakes one foggy Frisco evening. After moving into the former Elizabeth’s homey digs, all the mournful David can manage is a persistent vegetative state sandbagged by gallons of alcohol and a general, unspoken desire to drop dead himself. It takes the appearance of Elizabeth’s discorporeal spirit to wake him from his doomy reverie and forsake the booze in favor of getting rid of this initially unwelcome visitor. Together the pair embark on a quest to discover who Elizabeth was (or is, or something) – her memories of her past life are hazy-vague at best – and, wouldn’t you know it, fall in love in the process. Waters helmed the bitchy, depressing comedy Mean Girls most recently, but Just Like Heaven hasn’t a barbed bone in its body, relying instead on the polished scriptwork of longtime comedy writers Peter Tolan and Leslie Dixon (adapting from a novel by Mark Levy). Ruffalo does intellectual gloom like no one else these days and here hones his comic skills – physical, even – to razor’s edge, buoyed by the exuberantly winning Donal Logue (The Tao of Steve) and Napoleon Dynamite’s Jon Heder, who mumbles his way through a friendly psychic role with knowing lids forever at half-mast. For all its funky amour de mort, Just Like Heaven is no Topper, mind you. There’s a manipulative streak to the proceedings, and you’d have to be stone cold dead not to grasp the inevitable outcome long before the third act, but it’s a professionally handled sort of emotional manipulation common to its genre, dating back to Blithe Spirit and, somewhat less memorably, The Ghost and Mrs. Muir. And in the face of Witherspoon’s unrepentant charms, it’s very difficult to resist.