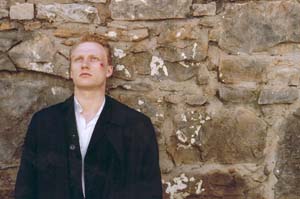 Oldboy, South Korean director Park’s recently released ode to vendetta-as-empowerment, is the second film in his ongoing vengeance trilogy; the third, Sympathy for Lady Vengeance, is forthcoming later this year. Sympathy for Mr. Vengeance is the opening freshet in what must surely be one of the bloodiest cinematic triptychs ever embarked upon; it’s also a finely wrought and emotionally complex film of surpassing, stylized beauty. As a director, Park possesses an auteurist’s eye for detail and framing. His compositions – incorporating everything from dead little girls to sweaty, mechanistic sex – are simply unrivaled in modern Asian filmmaking; even John Woo in his glory days can’t hold a candle to Park’s relentless and relentlessly obsessive-compulsive form of cinema. Sympathy for Mr. Vengeance’s byzantine plot appears fairly straightforward at first, but slowly, deliberately moves into uncharted waters with the fluid grace of a tiger shark bumping up against a potential meal. Shin plays the deaf and dumb Ryu, a green-haired youth working a thankless industrial job in between hanging out with his politico girlfriend (Bae) and scheming to find a spare kidney for his ill sister (Lim). An ill-advised visit to a black-market organ trader leaves him financially ruined and minus one of his own internal organs, so the increasingly desperate Ryu kidnaps his wealthy boss’ young daughter in the hope that the resulting ransom will save his sister’s life. The Ransom of Red Chief this isn’t, and Ryu’s scheme quickly, hideously backfires, making him one of two Mr. Vengeances in the film, both of whom are murderously intent on returning to a former state of grace that is no longer reachable. Half the pleasure, at least, of watching a Park film derives from the intricacies of his loaded storylines. Like its predecessor Oldboy, Sympathy for Mr. Vengeance relies heavily on its elaborate plot, which, when all else is stripped away, is really only a tale of family and the lengths people will go – of the depths they will fall to – to protect their own blood. Failing protection, vengeance rules the day and so Park’s film descends, with its own stately grace, down the bloodied slope of life into the lowest reaches of humanity, arriving not with a whimper (although there are plenty of those along the way), but with a bang-on portrait of people with no place else to go. All of this would be impossibly grim (in a trilogy, no less) were it not for Park’s cagey sense of humor and hyperstylized visual flair. Much of the film’s mordant wit comes from Bae as Ryu’s girlfriend: While he silently frets over his responsibility to his ailing sister, she’s out on the street, literally, accosting passersby with anti-American slogans and broadsheets as though she were some Parisian student circa May 1968. Their post-coital talks are conducted via a mirror set at the foot of their futon so that they don’t have to turn to each other to sign, and, discussing the proposed kidnapping with Ryu, she tells him, "it will be fun for the kid." That delusional sense of play informs all of Park’s films (including "Cut," his segment of the Three … Extremes anthology) and renders the viewer complicit in the onscreen upheavals to an uncomfortable degree. Sympathy for Mr. Vengeance is fun, up to a point, but once it crosses its own internal Rubicon it becomes downright horrific, with blood and torture and the vertiginous sense of being unable to wake from a particularly arresting nightmare. 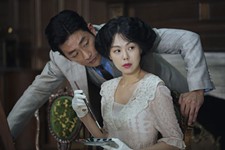