The earnest and well-intentioned Dallas-based cast and crew of this puzzling youth drama have labored to create a movie promoting teenage sexual abstinence. If you are a proponent of teenage sexual abstinence, you will likely not find fault with the execution of this idea, as the film is as tireless and repetitive in its task as a bench-drill crawler. The rest of us – including the unlucky critic – are left to ask ourselves: Okay, but is the movie any good? Let me break it down. Sarah (Simmonds, a likable young actress) is a 17-year-old suburban waif with grommet belts, heavy eyeliner, and fantasies about Joan of Arc. Her willful sexlessness and home altar, though not atypical of Gothic youth, confuse her classmates, some of whom scheme to deflower her (she’s cute in an Amy Lee kind of way). Meanwhile there’s Dave (McDorman), the new kid at school. With his shaggy blond mullet and choker, he’s kind of like the Coolest Kid in Youth Group, and he’s obsessed with Sarah, even after she vomits on his shoe. The central enigma: Will Sarah give it up? Much of the movie unfolds in blurry flashbacks and involves a chastity vow commemorated with matching giant medallions. As a deranged would-be lothario (Vodvarka) foams at the mouth and drives push-pins into Sarah’s yearbook photo, the filmmakers prove their youth cred with a crunching nü-metal soundtrack and swish pans during Sarah’s prayer-group meeting. Sarah’s faith will be tested, and as she lashes out at God for hobbling her so cruelly with a flaming desire in her nubile loins, I defy you to not think about families struggling through fetid floodwaters: Just deal with it, honey. There are two problems here. One is that the message is the movie. The characters are so thinly drawn as Sexually Abstinent Teens that we might as well be watching them speed-skate or explore undersea caverns. In other words, they serve as walking vessels for moral choices rather than as people logically connected to a set of circumstances shaped into a narrative plot. The pitch is so fevered that the film tips easily and often into camp, undercutting its ability to make a salient point with its audience – a fatal flaw in a film of this nature. Then there’s the message itself. The filmmakers do not so much praise abstinence – which is of course a perfectly valid lifestyle option – as they romanticize and fetishize teenage marriage, casting it in a rosy glow of ever-after that dodges the difficulty of maintaining a lifelong partnership at any age. You find and marry your One True Love as soon as your urges kick in, or you end up a bathrobed slattern on psychiatric medication in a trailer home (which the film assures us is a Very Bad Thing to be), like Sarah’s mother. By pushing an easy answer and ignoring the complexities of desire, the filmmakers don’t speak authentically to a contemporary youth audience, no matter how much lip gloss they put on their heroine. 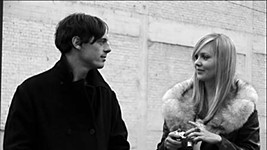 In Search of a Midnight Kiss
In Alex Holdridge's lovely new film, two twentysomething Los Angelenos wander the streets together on New Year's Eve, walking and talking amid the stunning black-and-white cinematography.