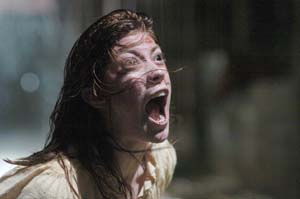 Prefaced by the words "This film is based on real events," The Exorcism of Emily Rose is serious stuff all right, diving aspergillum-first into the theological brouhaha surrounding the existence of God, the devil, and their theoretically neutral pitch, the soundstage courtroom set. To hell with Daniel Webster and the Darrow/Bryan contingent – true unbelievers everywhere now have a standard bearer to call their own in Linney’s kinda-sorta agnostic defense attorney Erin Bruner, who at the behest of her firm’s boss (Feore) takes the case of one Father Moore (Wilkinson), a muddled-seeming priest convicted of negligent homicide in the death-by-failed-exorcism of the titular Rose (Carpenter). Emily’s backstory is told in flashbacks and set amid a daringly nondescript courtroom drama that plays like basic cable’s Lifetime network movie of the week, were it hosted by Rod Serling. Actually, the ironic-humanist leanings of the ever-skeptical Serling zone would likely warp Emily Rose’s bizarrely unintelligent design all out of proportion. As a shocker, The Exorcism of Emily Rose is on a par with, oh, transubstantiaton (which is pretty shocking if you really think about it), but hardly as entertaining as William Friedkin’s pulp classic The Exorcist or even Ovidio Assonitis’ 1974 grindhouse possessor Beyond the Door, which makes it very dull going indeed. Linney does legal like nobody’s business, but as the film’s surrogate Thomas, her transformation from Tanqueray-swilling skeptic to slightly more open-minded Tanqueray-swilling skeptic is somewhat less than revelatory. "Do God and the devil really exist? People, we just don’t know for sure, but they might," is the gist of her closing argument. Saddled with a nicely vomit-free performance from Carpenter, who instead works her way through what looks to be some serious Pilates and assorted archaic languages, Derrickson’s film flirts with relevance and assorted hot-button topics of the day but ultimately fails to amount to much more than an overlong exercise in Jesuit Theosophy 101, played against the backdrop of Law & Order. There’s precious little devilry on hoof here, and while the melting demon-people are a nifty, unsettling touch, this alleged battle for the soul of mankind is in reality more of a sidewalk scuffle between a pair of legal eagles who, to all appearances, desperately need to get their fornication on. Derrickson’s staid direction, coupled with Wilkinson’s sad-sack priest and a general air of dreariness make for a courtroom thriller that’s somewhat less apocalyptic than the L.A. Law episode involving the death of Benny’s mom. 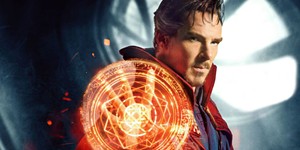 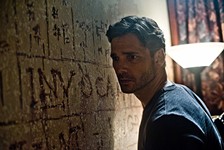