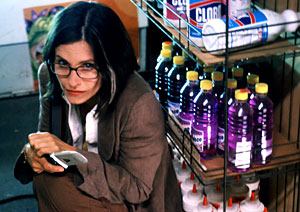 Harrison couldn’t have roamed farther afield from 2000’s funky Groove, which explored the Bay area’s underground rave culture from the inside out, if he’d directed a big-screen version of My Mother the Car. (Well, actually updating that forgotten Sixties TV also-ran might have been slightly more out there, but you get the point.) Far from being groovy, November is a dense, dark head-trip of a movie that snakes in and around its own storyline like a Buddhist python: It’s the bastard offspring of Memento and Mullholland Dr., and initially it’s just as challenging (some might say annoying) as either. Cox, looking an awful lot like Saturday Night Live’s Tina Fey, plays Sophie, a photography professor whose boyfriend, Hugh, has recently been shot to death in a botched convenience-store robbery. Guilt-ridden because it was her hankering for a midnight chocolate fix that sent her late beau into harm’s way, Sophie travels through the five stages of grief (for those of us lacking dead exes, they’re helpfully labeled onscreen) and off the deep end, stopping occasionally for a heaping helping of paranoid delusions, mysterious phone calls, and creepy noises from the neighbors upstairs. As the intentionally untrustworthy storyline unfolds, Sophie begins seeing a psychiatrist (SNL alumna Dunn) in hopes of sorting out her ramshackle mental state and finding a cure for some persistent headaches, but even this seems freighted with ominous portent. For one thing, the elevator in her shrink’s building is as dead as Hugh, forcing her to trudge up the dank stairwell time and again, and then there’s the self-reflective newspaper headline that keeps cropping up, asking "Is Modernism Dead?" Harrison, who directed on digital video from a script by first-timer Benjamin Brand, seems to think modernism’s alive and kicking up a storm (possibly somewhere out on I>Groove’s dusty dance floor). November, which has three separate versions of the same grim event repeated from various viewpoints and time frames, will strike some viewers as a pointless exercise in directorial mind-fuckery, and to be fair, Harrison seems to delight in keeping us wondering what the hell’s going on. At 73 minutes, the true story of what actually happened to Sophie and Hugh on Nov. 7 (the date is repeated throughout the film ad infinitum) arrives pretty quickly, and most audience members will have it all figured out by midfilm, but November, soaked to its noirish core in some fine cinematography from Nancy Schreiber (Your Friends & Neighbors) is worth a look if only because it valiantly struggles to make us think about – and question – the reality of what we’re seeing onscreen. It doesn’t always succeed, and sometimes it has the egocentric obviousness of a particularly clever, grad-student thesis film, but at least Harrison is game enough to mess with your head in the first place.

Groove
At the risk of sounding like a complete blurb whore, let me start off by saying that if you're planning on seeing only one rave ...