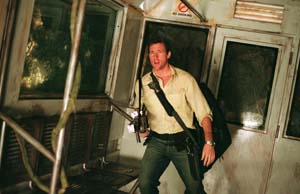 A Sound of Thunder

Ray Bradbury may be the greatest living American exemplar of the short story form, but that doesn’t mean his fluid prose gets a fair shake at the box office. Like fellow fantasist Stephen King, Bradbury’s been liberally adapted for the screen over the past half-century, and the results, with a few exceptions – Jack Clayton’s Disney-fied Something Wicked this Way Comes, and, surprisingly Re-Animator director Stuart Gordon’s warm and faithful take on The Wonderful Ice Cream Suit – have been awful. Even Truffaut muffed it with his detached and impossibly dull take on Fahrenheit 451 in 1966. (Bradbury’s first film, the 1953 exercise in Red Scare-era atmospherics It Came From Outer Space, wasn’t even a Bradbury short to start with.) Now comes Peter Hyams’ (Timecop) broken vision of one of the author’s best and most well-known stories, which in its original form was a nuanced and groundbreaking work of science fiction that read like a swift kick to the medulla oblongata. Abandoning any pretense of respect for the source material, Hyams and co-screenwriters Thomas Dean Donnely, Joshua Oppenheimer, and Gregory Poirier manhandle Bradbury’s delicacies into a lumbering and bewildered mess of grade-Z sci-fi clichés, ridiculous dialogue, and cornball plotting so over-the-top it’s a wonder Academy Award-winner Kingsley isn’t making the rounds performing tearful penance on the talk-show circuit. Of course, it’s initially difficult to discern that it’s the former Gandhi up there on the screen, saddled as he is with a hideous black wig that bears all the hallmarks of being less a sartorial choice than the result of a futuristic alien parasite enjoying a quick nosh at the character’s expense. (A Sound of Thunder is positively awash in bad hairpieces, leading one to believe that global warming is going to be the least of our problems.) It’s 2055 and Kingsley plays the hammily corrupt billionaire industrialist Charles Hatton, who has co-opted the discovery of time travel for his own ends: He runs a safari business that whisks those with adequate cash flow back to the late Cretaceous where they can bag some really big game, namely a Tyrannosaurus rex, from the relative safety of the company’s floating time-path. Predictably, things go awry when someone accidentally steps off the path and inadvertently alters the future, leading to a series of ever-mounting horrors, such as the sudden appearance of intelligent and bloodthirsty "baboonosauruses" and man-eating vines in the streets of Chicago. There are worse things lurking in this strange, new butterfly-affected world, too, but Ashton Kutcher, lucky him, is thankfully not one of them. Bolstered by some truly atrocious turns from Burns as the requisite sci-guy, and Oyelowo, who, to his credit, manages one of most surreal bad-movie death scenes ever seen while keeping a (reasonably) stoic air of doomed gravitas about him, A Sound of Thunder becomes much more than the sum of its clunky, unpolished parts. Instead, it evolves before our eyes into that rarest of cinematic gems, the good-bad movie, so infinitely inept that by sheer dint of its own incompetence it transcends both its overambitious origins and collective talent (or lack thereof) to become, wonder of wonders, entertainment on a grand, comedic scale. Not Hyams’ intent, surely, but it’s somehow refreshing to know that the spirit, if not the flesh, of Edward D. Wood Jr. lives on. 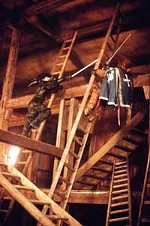