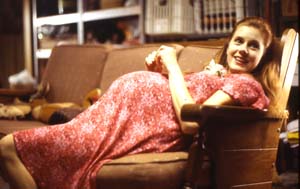 First-time filmmaker Phil Morrison announces himself with the assurance and uniqueness of vision – if not the same irresistible bombast – as the twin debuts nine years ago of the Anderson boys (that’s P.T. and Wes). Junebug is a far quieter film, but its emotional range – from lyrical to mundane, giddy to melancholic, and underpinned always by a feeling of genuineness – is more expansive. The superlative script (by the playwright Angus MacLachlan) is essentially a tweaking of Meet the Parents, in which a bride undergoes all the awkwardness, culture clash, and failed connections attendant to that trial by fire: the first immersion into her husband’s family. It’s a marital initiation rite, and for art dealer Madeleine (Davidtz) and new husband George (Nivola), it’s also the first hint of marital strife in their six-month-old union. Madeleine’s a world traveler and consummate sophisticate who specializes in "outsider" art, in which the artist lacks formal training. Her arrival in George’s tiny North Carolina town and homestead is met with trepidation by most and outright hostility by his mother, Peg (Weston); only her eager-to-please, pregnant sister-in-law, Ashley (scene-stealer Adams), is wowed by this double-cheek-kissing anomaly. Madeleine is kind and enthusiastic to her new family (in a sense, this is just another deal to seal), but she isn’t terribly attentive. She gets her husband’s mother’s name wrong (she calls her Pat, not Peg), and every time she says it wrong it’s like a little earthquake in the kitchen: Everyone braces for the aftershocks, but Peg (not Pat) keeps her brightly lipsticked mouth in a tight smile, her mental "Madeleine shit list" growing ever longer. Junebug, whose plot is thin (but not undernourished), is built on a host of remarkably nuanced characters; in the push and pull for audience sympathy, every side gets its say. Critics, some of them quite agog, have applauded Morrison and MacLachlan for presenting such a nonjudgmental take on these rural Carolina people. (It’s no surprise – Morrison is a Winston-Salem native, and MacLachlan graduated from the North Carolina School of the Arts; what is surprising is that one should congratulate a filmmaker for not caricaturizing his subjects.) As with its wholly of-this-earth characters, Junebug presents a true portrait of the environs: in the banquet hall of a church potluck, in Peg’s mail-order-pretty living room overstuffed with tchotchkes. Morrison likes to film these places when they are quiet and empty, but even more affecting is when he captures his characters alone in these places, when they can shake off the forced smiles and settle into their more natural selves. There is Madeleine, desperately rummaging for a cigarette; George, in the go-to pose for many adult children returning home, sleeping on the couch; and Ashley, stripped for once of her über-cheer and clutching a photo of her negligent husband (McKenzie, here breaking free of The OC) who is only rooms away but, emotionally, on an alternate plane. Small moments, all of them, but the sum is something deeply profound: about awkwardness, culture clash, failed connections, and – ultimately – the strength that comes from surviving a trial by fire. 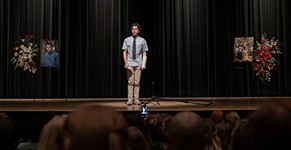