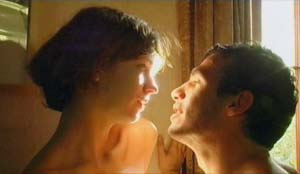 In two words, 9 Songs is scenester porn: fucking – which is not simulated – and going to shows. No mutual friends, no stomach flu, no feeding the dog. Just lying around all fashionably rumpled in lime-washed boho London flats, reading erotica out loud, and doing lines. Maybe once or twice somebody masturbates too much and hurts the other’s feelings; maybe one or the other of us is on an SSRI, but that only demonstrates how interesting and complex we are. And then we go see Black Rebel Motorcycle Club at the Brixton Academy. Maybe at one point we’ll take a trip to the northern seaside and fuck there for a couple of scenes. A number of critics have praised this movie beyond all measure for its honesty, for its bravery, for the commitment of the actors, but let’s not get carried away: inasmuch as we are watching a relationship evolve, we’re also getting off on the characters’ iBooks and tastefully underfurnished island kitchens. Winterbottom shot it in DV, and much of the film is grainy or gauzily overlit; people are forever lighting their cigarettes in slow-motion because it looks so bloody cool. There’s nothing wrong with the film conceptually besides the goofy, ponderous framing story – oh, you silly porn – and the critical voices lauding the film’s sexual frankness are onto something. Take a date to this movie, and you will probably score, especially if your intended also likes Franz Ferdinand, armchair philosophy, and funny little English cars. (A word of caution, however: The Dandy Warhols concert sequence is very strobe-lit, so if your date has a neurological disorder, you may risk a seizure and have to leave early for the ER.) As with nonlifestyle porn, fatigue inevitably sets in around the hour mark, right about the time Stilley breaks out her freaky boots and walks all over her lover’s torso. We are supposed to read their forays into kink as relationship boredom, but it’s too easily mistaken for the regular kind, thanks to the relentless back-and-forth structure of the film and the rapid cutting in and out of the expository scenes. When they’re not blindfolding each other and getting it on, the characters are awfully twee – their banter is too cute, they play car games, and argue about how to take tea, and are annoyingly hip. Winterbottom would not agree, but the movie is too insubstantial and feels too in love with itself to really reveal anything meaningful about our relationships, about memory, about the nature of desire. There is room in the world for stories about how people really make love – with people really making love in them, instead of gyrating around under a layer of iridescent prop sweat and strategically placed sheets. But 9 Songs isn’t quite that movie. It works best as a spank-it movie you don’t have to feel guilty about and that you can dance to. And there’s nothing wrong with that.