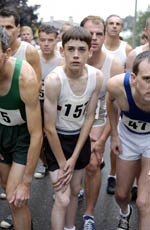 Fourteen-year-old Ralph Walker (Butcher) is no saint. A gawky charity-case student at an Ontario parochial school – circa 1954 – Ralph confesses to twenty-two episodes of onanism in one week alone. While his critically ill mother lies in a coma, Ralph lives alone in the family house, ostensibly supervised by his grandmother, whose excuse notes to school are all forged by his best friend (Kanev). But he’s a dreamer. So when a teacher (Scott) tells Ralph that any person can perform a miracle if he or she is pure, devoted, and faithful enough, Ralph decides to enter and win the Boston Marathon – even though he smokes behind the bleachers and gets winded on the stairwell – because he’s sure his victory will bring his mother back. A strange youth dramedy, Saint Ralph isn’t easily categorized according to the Hollywood rubric. It’s sexually frank in moments and is up-front about the spiritual dimension of its characters’ lives: not an unreasonable combination but certainly an unusual one, and one that will likely skew the film toward an older market. An older market, however, will recognize that Saint Ralph is very conventional in its characterizations and narrative. Scott – who looks hot in a cassock – is the requisite kindly, forward-thinking teacher with a secret in his past; of course he runs afoul of the school’s glowering headmaster (Pinset), who is quick to crush young Ralph’s dreams and menace the faculty when they step out of line. There’s even the inevitable tearful third-act montage set to Leonard Cohen’s "Hallelujah," though in the world of Telefilm Canada, Gord Downie sings it. The movie does have two things going for it (besides Tilly in a nurse’s uniform). One is its brisk, sunny aplomb. It zips right along in cheerful montages and abbreviated scenes, divided by intertitles announcing the feasts of saints. The second is Butcher, who seems to be something like the masculine Amanda Bynes of Canada: goofy and authentically youthful but remarkably assured onscreen. He’s got jug ears, a snaggletoothed smile, and a tragic bowl cut, yet he radiates such lopsided self-confidence that his Ralph can float a line like "I’m destined for greatness" without sinking the moment into smarminess. The film isn’t going to catapult Butcher to international stardom, but he holds his own in it and helps to sell its curious logic. Parents in search of inspirational family fare could do worse, but they should be cautioned that our young hero drinks bourbon, peeps at the girls’ shower, and burns down a house. 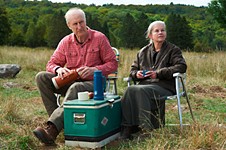 Still Mine
James Cromwell and Geneviève Bujold star in this octogenarian love story.