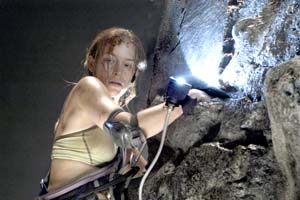 Oh, that it should come to this for Piper Perabo, who, with her disarmingly cute little button nose and an outwardly perky demeanor that simultaneously seems to signify both untapped sass reserves of enormous magnitude and quite possibly some genuine old-Hollywood hidden depths. At the very least I thought of her, for no particular reason come to think of it, as somewhat more than another pretty, vacant face. Then there was Coyote Ugly, which cast the rowdy good times ’n’ beer brawler’s bar as some sort of Bizarro World arena for contemporary female empowerment. I know I’m not the only film reviewer of the male persuasion to have once proudly crushed on Ms. Perabo, but it’s been disheartening to see her tread water in less-than-stellar outings such as Cheaper by the Dozen and Roland Richter’s little-seen psych-out The I Inside. You can also see the athletically inclined Perabo in Hunt’s forgettable The Cave, which, apart from having one of the blandest titles ever, is such a by-the-book knockoff of Alien that it’s a wonder Gene Corman wasn’t involved in some capacity. Hunt comes from a solid assistant director background, but here he’s strictly painting by numbers in the dark, and includes obvious nods to everything from Journey to the Center of the Earth and The Abyss to, somewhat less obviously I suspect, Leni Riefenstahl’s Teutonic mountaineering epic Der Heilege Berg. Here, however, the sacred mountain is buried within the earth itself: a massive, 90-mile-long cave complex that plummets downward, presumably to hell itself. Perabo, along with Dazed and Confused refugee Hauser and a motley crew of professional cave divers are trapped inside, then stalked by unseen bitey things, and, finally, find their way back to Budapest, which is an excellent break for them due to how cheap it is to shoot in Hungary. Bonuses all around, but a double one for Perabo, the only cast member to survive this dull-as-dirt Cave with her actorly integrity intact. Note to Piper: Study Erin Moran’s role in Roger Corman and Bruce Clark’s 1981 prototype of The Cave – Galaxy of Terror – and be thankful at least your character wasn’t raped by a giant space slug. Now go get ’em, Tiger! 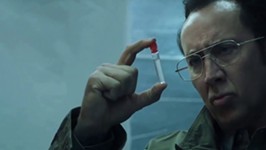 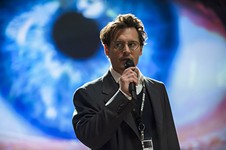