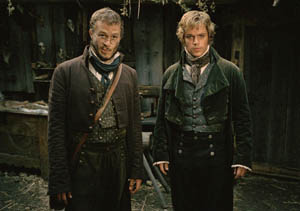 Terry Gilliam is at it again: bringing one more skewed fantasy to the screen. It’s been a while since his last directorial outing in 1998, Fear and Loathing in Las Vegas, and anyone who saw the 2002 documentary Lost in La Mancha (about Gilliam’s problem-stricken and ultimately aborted effort to mount a film production of The Man of La Mancha), will have some sense of the puckish obstacles that often separate the filmmaker from his vision. The Brothers Grimm is no different. Despite the film’s muddled story, we witness frequent glimpses of the visual magic The Brothers Grimm contains within. For starters, the movie is not at all a biopic of the folklorists Wilhelm and Jakob Grimm; it’s not even an artistically licensed extrapolation of their lives and careers. It’s pure jabberwocky, although credit for the script goes to Ehren Kreuger (also responsible for The Skeleton Key and both American rewrites of The Ring movies). For the purposes of this movie the brothers have been made over as Will (Damon) and Jake (Ledger), a couple of con artists traveling through French-occupied Germany during the Napoleonic years. Together with their accomplices, the brothers stage occult occurrences and then hire themselves out to frightened villagers to exorcise the ghosts and demons before moving on. Jake is always jotting down new folktales in his journal, but that is as much as we see of the recognizable Grimms, publishers of the eternal collection of fairy tales. Instead, this movie plops the reimagined brothers into the middle of what might have been one of their own hand-me-down tales. When the French become wise to the schemes of Team Grimm, Gen. Delatombe (Gilliam stock player Pryce) presents them with a real-life mystery to solve or face the executioner’s axe. Children in a certain village have been disappearing and the brothers’ lives now depend on finding the solution. Overseeing them is Delatombe’s henchman Cavaldi (Stormare). As the Grimms venture into the magical forest and encounter the evil queen (Bellucci) who is causing the children’s disappearances, the film becomes a showcase for Gilliam’s elaborate artistic design, which is, at times, mesmerizing. However, the effects come at the expense of character development. The Grimms are as sketchy as Delatombe and Cavaldi are excessive. An intriguing woman (Headey) who helps the brothers is reduced to little more than a love object for the two. Furthermore, images from various fairy tales appear throughout (Cinderella, Little Red Riding Hood, and so on), without any further narrative development, lending the film the air of a fairy tale without any of the substance. Although Gilliam’s bright color palette and weird camera angles lift the film, it has an overall sense of darkness, as if shot among people who have yet to see the Age of Enlightenment. It’s easy to sense the allure this fantastic project held for Gilliam, but it’s hard to imagine the outcome is anything like his early expectations.