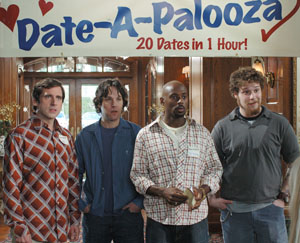 Surely The 40-Year-Old Virgin has broken some Guinness record: The first boner joke clocks in at under a minute, in which stereo-equipment salesman Andy Stitzer (Carell) wakes up with morning wood. It’s certainly not his first (in a state of arrested adolescence, Andy doesn’t know how to drive a car and spends most nights cuddling up to his game console), and it won’t be his last in this amiable comedy that chronicles Andy’s fumbling attempts to finally get in the game. Schooling Andy in their crude brand of seduction – Lesson No. 1: Go for the drunk girls – are three coworkers (played by Malco, Rogen, and Rudd). It comes as no great shock that these three lugs – loud proponents of the "lay ’em and leave ’em" philosophy – end up learning a thing or two about love and intimacy from the newbie. What is a surprise, however, is how genuinely good-hearted The 40-Year-Old Virgin plays out. Credit that achievement to director and co-writer Judd Apatow (Freaks & Geeks) and his star (and co-writer), former Daily Show correspondent Steve Carell. In his first leading-man role, Carell expands upon the titular premise to create a full-blooded, complex character who is appealingly earnest and willing to plumb a pain in Andy that extends beyond his morning menace (his scenes with the always-entertaining Keener, as a potential love interest, are especially sweet). Ably backing him are the wisecracking coworkers; Rogen and Rudd, in particular, have a ridiculously funny exchange, one-upping "your mama" jokes to a "you know how I know you’re gay?" riff. The 40-Year-Old Virgin isn’t quite a home run: The visually flat film leans on a pop culture crutch that probably won’t age very well, and the finale – while terrifically funny – feels piped in from another, far sillier movie. Still, in the dog days of summer – and Hollywood’s unleashed quite a few dogs this season – The 40-Year-Old Virgin is a standout, a gross-out comedy that makes its audience go "awwww" as much as it goes "ewwww."