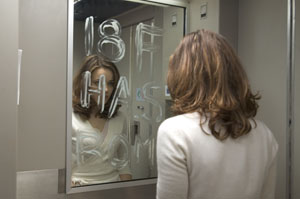 Watching the intense young Irish actor Cillian Murphy work is one of moviegoing’s greatest pleasures, akin to that of a weekend soccer fan watching the fluid ballwork of a Best or a Beckham as they tear up the pitch with economic zeal. It’s also one that both Hollywood and American audiences, in general, are becoming more aware of, thanks to his perfectly creepy turn as the insane asylum head Dr. Jonathan Crane in Batman Begins. Judging from his earlier film roles in risky, often daring films like Kirsten Sheridan’s riveting Disco Pigs, John Crowley’s grimly funny Dublin portrait Intermission, or even Danny Boyle’s zombie-pathogen epic 28 Days Later, it’s becoming clear that Murphy’s talents are just beginning to fire on all cylinders. Lucky us. He’s the best thing about Wes Craven’s new Red Eye, a busy little engine of suspense that never pauses once for breath in its 85-minute running time. It’s a minor triumph in Craven’s up-and-down career. With its workmanlike plotting hammered solidly into place by a pair of well-chosen leads in Murphy and McAdams, the film never falters in its mission to keep you on the edge of your seat (or, if not that, from dashing to the concession stand and/or bathroom). In many respects, it feels like a Larry Cohen script; it’s similar in several regards to last year’s razor-taut Cellular. Red Eye screenwriter Carl Ellsworth doesn’t have Cohen’s mordant wit, though, and Craven plays this one strictly by the book. For Miami hotel manager Lisa Reisert (McAdams), it’s the Book of Job, apparently, as she finds herself seated next to the devil himself in the form of Murphy’s coolly diabolic killer, part of an elaborate terrorist plan to assassinate one of McAdams' more prominent hotel guests. As Murphy’s reptilian killer maneuvers Lisa into helping his cause – an archetypal Craven leading lady to the bitter end, she never stops fighting back via several clever maneuvers of her own – Craven’s film becomes a textbook cat-and-mouse thriller that’s relentlessly paced, shot, and edited. It has all the hallmarks of a terrific B-movie, Frankenheimer meets Corman, say, but Murphy’s chilling take on this cold-blooded cipher of a man (we never really find out who or what he is, or who he’s working for, and to the script’s credit we don’t really care all that much) is immensely watchable. As an actor he exudes an intensity similar to that of a young Jack Nicholson, only less blasé, and more edgy. Watching him in Red Eye, you begin to hope you never have to meet this guy face-to-face lest you piss him off and he then kills your whole family just for kicks. McAdams, too, does great work here – she reminded me a little of Craven’s old scream queen Heather Langenkamp from his Nightmare on Elm Street days, a tough cookie put in an impossible spot but unwilling to let the darkness take over completely. Red Eye’s no classic, but with its smart, twisty little script and those two killer performances, it is a helluva lot of fun, and a perfect grace note to an exceptionally action-packed summer movie season.