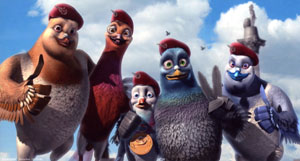 Valiant, an animated adventure about heroic homing pigeons in Great Britain during World War II, comes flying in on a wing and a prayer. With flatly drawn CGI characters and backgrounds, a script and direction that make no special use of the impressive voice talent assembled, and historical subject matter that's not likely to find many enthusiasts beyond the white cliffs of Dover, the future of Valiant does not appear to be high-flying. Enough. The movie makes use of every avian pun possible, a pattern that becomes quickly monotonous and predictable, if not contagious. Valiant (voiced by McGregor) is a small bird who believes that what matters most is not the size of one's wingspan but the size of one's spirit, and so enlists in the RHPS: the Royal Homing Pigeon Service. He first has to convince his mother that it's time for him to leave the nest, then undergo basic training before he and his Squad F buddies are sent on a perilous mission behind enemy lines. Throughout it all he keeps a stiff upper beak. And speaking of beaks, they're difficult features to animate for dialogue without turning the birds' maws into Silly Putty distortions. In fact, pigeons, in general, are not regarded as the loftiest or most attractive of birds, which makes the task of rendering them anthropomorphic and lovable all the more difficult. Produced in England and already released there, Valiant is just now getting its U.S. premiere. The movie’s takeoffs on old war-movie and RAF-flyboy cliches will certainly not connect with the knowledge base of America’s current youngsters, which will only cause Valiant to seem that much more foreign. An epilogue tells us that pigeons saved the lives of thousands during the war, and that 31 of the 53 top honors given to England’s animal war heroes were awarded to pigeons. I know I shouldn’t smirk, but isn’t that kind of honor that Trafalgar Square is for?