A top-notch cast was gathered and then wasted in this atmospheric but prosaic hoodoo spooker. Although it's nice to see Hudson break from the string of wan romantic comedies she's starred in since earning her Oscar nomination for Almost Famous, she achieves no career breakthrough here as the plucky heroine Caroline, a hospice worker who takes a live-in job in a haunted old plantation home in the Louisiana bayou. She's hired by the Devereaux family attorney Luke (Sarsgaard, in his first screen role where he makes little impression) to attend to elderly Ben (Hurt), who's been hobbled by a stroke. But she also has to deal with Ben's dotty spouse Violet (Rowlands), who appears to be harboring secrets. The durable Rowlands never quite becomes fully believable as a Southern hoodoo practitioner, and it's actually rather sad to see this veteran perhaps heading down the elderly Bette Davis scream-queen path. And casting the multidimensional Hurt as a semicatatonic begs us to call into question the basic acumen of the filmmakers. As scripted by Ehren Kruger (Arlington Road, Scream 3, the American Ring remakes, and the upcoming John Carter of Mars and The Brothers Grimm), The Skeleton Key presents a mishmash of tired horror clichés that steadily accumulate while forestalling the film's final twist. Like good horror heroines, Caroline of course goes into the attic where she hears strange noises and plunges ahead with her own investigation instead of going to the police when Ben writes "Help me" on his bedsheets and then climbs out on the roof in the rain and falls. And, yes, it's always raining. As for how the invalid Ben gets from his bed to the roof, the answer is hoodoo (narrative pains are taken to differentiate hoodoo, an American folk magic, from voodoo, a religious tradition). Director Softley (Backbeat, Hackers, The Wings of the Dove, and K-PAX) again shows his gifts for creating atmospheric milieus that emphasize the visual over the literal. His Louisiana feels humid and ancient. Yet the movie, overall, lacks tension and suspense, and some of its key emotional moments were found by the audience to be laugh-out-loud risible. To paraphrase the popular song, "Hoodoo?! Who do you think you're fooling?" 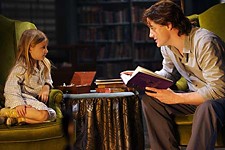 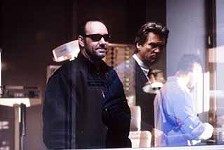 K-PAX
Based on the novel by Gene Brewer, K-PAX is the story of Prot (Spacey), a man who claims to have traveled to Earth from another ...