Bergman’s final film – apparently it wasn’t Fanny and Alexander after all, as he famously proclaimed in 1982 – is a pure distillation of the great director’s ongoing themes of the frailty of the human psyche and mankind’s willful inability to accept the inevitable, whatever that may be. Shot for Swedish television on hi-definition digital video, Saraband is a sequel, a revisitation, actually, to 1973’s Scenes From a Marriage. Thirty-odd years have passed in the lives of former husband and wife Johan (Josephson, who at 85 continues to curdle over with enough barely suppressed rage, ennui, and a sort of lifelong disappointment that at times you worry for his cardiovascular system) and Marianne (Ullman, still splendid and lovely and utterly in command of every frame in which she appears). As the film opens, we see her poring over a table awash in photographs – memories, moments captured, moments perhaps better off lost – and addressing the camera while she discusses her notion of visiting Johan, who now resides in twilight in a ramshackle but finely appointed house in the middle of nowhere. Their reuniting, and the heated, embattled, melancholy conversations that follow – Saraband is dense with the director’s trademark dialogues, which arise from the deep, dark, endless night of the soul even when they arise in broad daylight – is broken up into 10 separate scenes. The wealthy Johan, for his part, is embittered and, there’s no other word for it, tortured by the proximity of his 61-year-old son Henrik (Ahlstedt) and granddaughter Karin (Dufvenius); he views his son through the lens of Henrik’s own despair at the death of his wife and Karin’s mother, Anna, two years before. Henrik, in turn, loathes the old man for his parsimony over the family purse strings, and poor Karin simply wants to get the hell out of there and move to the city to pursue a musical career in Stockholm. Fat chance. Bergman’s films, throughout his career, have probed the self-defeating sickness inherent in the human condition with what can only be called clinical abandon; it’s his actors – Ullmann, Josephson, Max von Sydow, et al. – who have consistently imbued his films with a human heart, however black it may seem to be. It’s no surprise, then, that Ullmann, her face pleasantly softened by the intervening years, is here a veritable force of feminine nature, the calm eye in the center of Bergman’s ever-moving emotional maelstrom. Her face registers nuances of emotion that only a few other actors have been able to achieve, ever. And Josephson, hobbled by age but still and ever the (self-)wounded grizzly, master of a dead domain, cut off from life by his own spiteful paw, is equally remarkable. You can’t take your eyes off of either one for even a moment. "First people are together," he tells Marianne, "then they part ways and talk on the phone – and finally there’s silence." "That’s sad," she says, with a hint of a resigned smile. You can take that as a final summation of Bergman’s sublime career if you’re so inclined, but, most surprising of all, the wily Swede with the facial fixation has secreted one final trump card up his sleeve. It may not be the ace of spades, but I’m almost sure I caught a glimpse of a heart in there somewhere.

Fanny and Alexander
This semi-autobiographical film from the great Swedish master's late career is regarded by many as his crowing achievement. 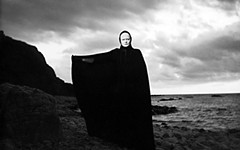